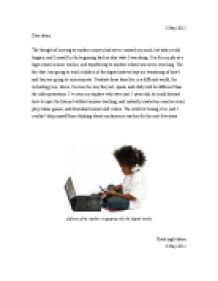 ﻿2 May 2012 Dear diary, The thought of moving to another country had never crossed my mind, but today it did happen, and I myself in the beginning had no idea what I was doing. It is for my job as a high school science teacher, and transferring to another school was nerve-wrecking. The fact that I am going to teach children of the digital natives kept me wondering of how I and they are going to communicate. Students these days live in a different world, the technology era, where I?m sure the way they act, speak, and study will be different than the older generation. I?ve seen my nephew who were just 5 years old, he could learned how to open the Internet without anyone teaching, and instantly created an email account, play online games, and download musics and videos. The world is turning over, and I couldn?t help myself from thinking about my days as a teacher for the next few years. A photo of my nephew engaging with the digital media Good night diary 3 May 2012 Dear diary, Old fashioned and new fashion, there was just a big gap between these, and I simply could understand why. ...read more.

A photo that I took secretly in the library, my student who went on to her phone after reading several paragraphs of the given chapter Good night diary 5 May 2012 Dear diary, The digital natives aren’t just using the digital media as their social tool, but they also developed their own digital language. I learned that when I entered the lift going up to my office, and bunch of female students were chatting non-stop. I heard one of them saying something related to social networks and internet, something like ‘Facebooking’, ‘Tumblring’, and ‘Googling’. ‘Let’s Skype today!’ was the last sentence I heard from that student, and the others quickly agreed. Okay, I kinda get the terms, because they just add “ïng” to the words, and I am familiar with some of those social networks, or maybe not, but then, what kind of language are they using? Can’t they use proper language like ‘Do you want to go online today?’ or ‘Have you check this in Google?’ ..... I just don’t get it. ...read more.

The problem is, I don?t think I can accept that kind of language, and they way the student wrote the message proved that technology has worsen teenager?s language. Found this in Internet, and I agree, technology ruins both student?s writing skills and language Good night diary 8 May 2012 Dear diary, Since I couldn?t get the students to learn using the old ways, I myself then have to create several accounts for my social networks, mainly Facebook, Skype, Tumblr, and etc. The reason why students these days prefer computers more than textbooks is because they can work and play at the same time. By opening new tabs in the internet, students can easily search information in one tab, the other tab for reading comics, and the other tab for playing online games, also listening to music. This is why I was thinking of inventing a science computer game for them to study and play at the same time, or at least find an educational game. I?m sure this is a good way for me to communicate with them better. What a good picture I found in the Internet Good night diary ...read more.