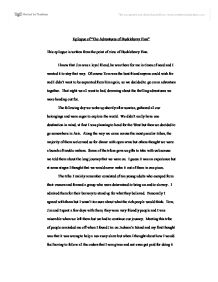 Epilogue of The Adventures of Huckleberry Finn

Epilogue of "The Adventures of Huckleberry Finn" This epilogue is written from the point of view of Huckleberry Finn. I knew that Jim was a loyal friend, he was there for me in times of need and I wanted it to stay that way. Of course Tom was the best friend anyone could wish for and I didn't want to be separated from him again, so we decided to go on an adventure together. That night we all went to bed, dreaming about the thrilling adventures we were heading out for. The following day we woke up shortly after sunrise, gathered all our belongings and were eager to explore the world. ...read more.

I guess it was an experience but at some stages I thought that we would never make it out of there in one piece. The tribe I mainly remember consisted of ten young adults who escaped from their owners and formed a group who were determined to bring an end to slavery. I admired them for their bravery to stand up for what they believed. Personally I agreed with them but I wasn't too sure about what the rich people would think. Tom, Jim and I spent a few days with them, they were very friendly people and I was miserable when we left them but we had to continue our journey. ...read more.

As we were traveling around from place to place, Jim would fantasize about finally living in a place that he could call home, while Tom just lay there staring into space, with his eyes closed and a pipe in his mouth. I was in charge of the whole raft and if it wasn't for me then we would have probably been abandoned on some island. On the other hand that would be quite an adventure! Nevertheless, after a couple of restless months we finally arrived in Asia, not sure about the place exactly! There were endless fields of empty land, no human beings in sight, only a few damaged shelters and so we all agreed on searching for materials to build a shelter in order for us to start a whole new life. Word Count - 500 ...read more.