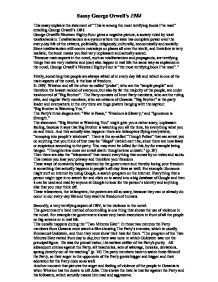 Essay George Orwell's 1984 This essay explains the statement of "This is among the most terrifying books I've read" entailing George Orwell's 1984. George Orwell's Nineteen Eighty-Four gives a negative picture, a society ruled by total totalitarianism. Totalitarianism is a system where the state has complete power over the every-day life of the citizens, politically, religiously, culturally, economically and socially. Since totalitarianism still occurs nowadays on places all over the world, and therefore is very realistic, the book makes you feel very unpleasant and actually scared. "Because main aspects in the novel, such as totalitarianism and propaganda, are terrifying things that are very realistic and (can) also happen in real life the same way as explained in the novel, George Orwell's Nineteen Eighty-Four is "the most terrifying book I've read"." Firstly, something that people are always afraid of in every day life and which is one of the main aspects of the novel, is the loss of freedom. In 1984, Winston and all the other so-called "proles", who are the "simple people" and therefore the lowest-ranked of everyone, but also by far the majority of the people, are under total control of "Big Brother". The Party consists of Inner Party members, who are the ruling elite, and regular Party members, who are citizens of Oceania. ...read more.

For example the government shows very harsh executions in front of all the people on big screens or in real life. This usually happens during the "Two Minutes Hate". In these two minutes the Party members from Oceania must watch a film showing The Party's enemies, which is usually Emmanuel Goldstein, and then they must show their hate for them. "The program of the Two Minutes Hate varied from day to day, but there was none in which Goldstein was not the principal figure. He was the primal traitor, the earliest defiler of the Party's purity. All subsequent crimes against the Party, all treacheries, acts of sabotage, heresies, deviations, sprang directly out of his teaching" (p. 14) The party members have to watch these films of the Party, so their anger to the opponents of the Party grows bigger and bigger and their adoration for the Party does so as well. Another moment that pictures the anger and feeling of violence of the people in Oceania is when Winston has the desire to kill Julia. This shows the hate he has for against the Party and his followers, which actually makes him mad and aggressive. Mainly the fact that there could be a so-called "Two Minutes Hate" to make people lose their frustrations and become brainwashed ...read more.

are very scary, because they educate the children and learn them how to behave, who to love and who to hate. These groups can also be compared to our daily life, because to child soldiers is actually done the same: They are brainwashed by the group that educates them and they learn to hate everyone that opposites their state and do everything to protect them. The fact that children are actually brainwashed and educated by these groups is very terrifying to read, since it happens on the worst places on Earth still nowadays as well, mostly in Undeveloped Countries. For me, George Orwell's 1984, is quite surely the most terrifying book I'm reading, because it shows how the world I am living in right now could have been at this moment or in the future. Because the problems in the novel are so realistic and actually (could) happen in our daily lives, they make me feel quite scared and terrified. Particular things in the novel such as "telescreens" and the groups that brainwash and educate children unnaturally are things that are actually already happening nowadays, but in different (not less severe) forms, such as on the internet (Google), camera's in cities, and army groups that train children to child soldiers. I think these problems are horrible and very scary, because they threat people's lives and human rights. Words: 1291 Marijn Vonk Tv4c ...read more.