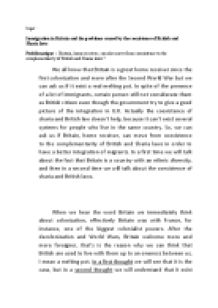 Essay on Immigration and Sharia Law in UK

ï»¿Sujet : Immigration in Britain and the problems caused by the coexistence of British and Sharia laws Problématique : Britain, home receiver, can she move from coexistence to the complementarity of British and Sharia laws ? We all know that Britain is a great home receiver since the first colonization and more after the Second World War but we can ask us if it exist a real melting pot. In spite of the presence of a lot of immigrants, certain person still not considerate them as British citizen even though the government try to give a good picture of the integration in U.K. Actually the coexistence of sharia and British law doesn’t help, because it can’t exist several systems for people who live in the same country. So, we can ask us if Britain, home receiver, can move from coexistence to the complementarity of British and Sharia laws in order to have a better integration of migrants. In a first time we will talk about the fact that Britain is a country with an ethnic diversity, and then in a second time we will talk about the coexistence of sharia and British laws. When we hear the word Britain we immediately think about colonization, effectively Britain was with France, for instance, one of the biggest colonialist powers. After the decolonization and World Wars, Britain welcome more and more foreigner, that’s is the reason why we can think that British are used to live with them up to an oneness between us, I mean a melting pot. ...read more.

have to pass a citizen test to prove that they know English language and British way of life, in other words, to prove that they are able to live in the U.K and prove that they can settle permanently in the country The problem is that even for people born in Britain the test is too hard, they are unable to answer. We can ask us if this test is in place to ?racist? reasons? Regarding the point system, we acquire point in order to become British, this is possible if you have been living in Britain for 5 years, and if you pass the British test. We can have point in different ways like speaking English, having useful competences, paying taxes, doing voluntary work, being flexible where you live. But this system means that we can work in Britain but not be able to have the Britain identity, it breaks the link between temporary migration for work and permanent residence. It stills a limiting measure. But even with this solution, Conservatives aren?t happy, because to their mind the system isn?t tough enough, and the mainstream parties of the population share this point of view. Are British hostile to the came of the immigrants? Yes, because they fear immigration as an issue, because recession threats British jobs, so if there isn?t enough job for British, it?s may be ?abnormal? that there is a job for an immigrant. ...read more.

Moreover, Sharia law is very ancient and does not correspond to our modern society, it applies principals that are sometimes contrary to British common law and it may represent a first step in the creation of a Islamic State in Britain. This is although the idea of the group ?Muslims against the Crusades? which want to create Sharia controlled zone in three boroughs in London. So, the coexistence of those two laws is tense. Despite this difficult cohabitation, an introduction of certain point of the Sharia law in the British law should be a good idea to calm the tense between British and Muslims. In fact if people live in the same country but has different legal system because of their religion, that promote division. That is the reason why Archbishop of Canterbury is in favor of an adoption in British law of certain aspects of sharia law to help maintain social cohesion and to make more easy the life of British Muslims because they don?t have to choose between cultural loyalty and state loyalty. But this idea won?t be apply if Muslims don?t admit that women are not like a second class citizen. To conclude, Britain has every interest to move from coexistence to one complementarity of Sharia and British laws. It can help Britain to have a better picture of ethnic diversity and reduce the racism. We can ask us if it exist the same problem with laws of another ethnic group ...read more.