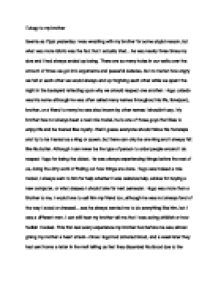 Eulogy to my brother.

Eulogy to my brother Seems as if just yesterday I was wrestling with my brother for some stupid reason, but what was more idiotic was the fact that I actually tried... he was nearly three times my size and I had always ended up losing. There are so many holes in our walls over the amount of times we got into arguments and peaceful debates, but no matter how angry we felt at each other we would always end up forgiving each other while we spent the night in the backyard reflecting upon why we should respect one another. Hugo Jabado was his name although he was often called many names throughout his life, ibne(son), brother, or a friend to many he was also known by other names I shouldn't say. ...read more.

Hugo was more than a Brother to me, I would love to call him my friend too, although he was not always fond of the way I acted or dressed... see he always wanted me to do everything like him, but I was a different man. I can still hear my brother tell me that I was acting childish or how foolish I looked. This first real scary experience my brother had before me was almost giving my mother a heart attack...Once Hugo had donated blood, and a week later they had sent home a letter in the mail telling us that they discarded his blood due to the possibility that it was positive for HIV. ...read more.

I envy him for this reason because I cannot be out of the house past midnight without my parents thinking that I was doing something illegal or worse Harram or forbidden in my religion. My brother was however a very unique person, many people have come to agree upon the fact that he developed his own dictionary and used it whenever he was trying to explain sports or cars to someone... he is unique in the fact that no matter how wrong he was he stood up for what he thought was right even if it would make a scene. I would like to remember my brother's passing not as a miserable time but one where he is content and happy with our understanding that he is in a better place. ...read more.