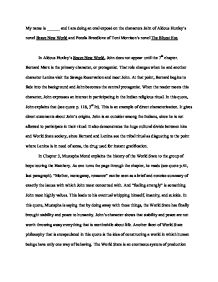 My name is ______ and I am doing an oral expos� on the characters John of Aldous Huxley's novel Brave New World and Pecola Breedlove of Toni Morrison's novel The Bluest Eye. In Aldous Huxley's Brave New World, John does not appear until the 7th chapter. Bernard Marx is the primary character, or protagonist. That role changes when he and another character Lenina visit the Savage Reservation and meet John. At that point, Bernard begins to fade into the background and John becomes the central protagonist. When the reader meets this character, John expresses an interest in participating in the Indian religious ritual. In this quote, John explains that (see quote p. 118, 3rd ln). This is an example of direct characterization. It gives direct statements about John's origins. John is an outsider among the Indians, since he is not allowed to participate in their ritual. It also demonstrates the huge cultural divide between him and World State society, since Bernard and Lenina see the tribal ritual as disgusting to the point where Lenina is in need of soma, the drug used for instant gratification. In Chapter 3, Mustapha Mond explains the history of the World State to the group of boys touring the Hatchery. ...read more.

When he comes into direct contact with the State, John is crushed. The title of the novel, "Brave New World" which originates from Shakespeare's play The Tempest, takes on an increasingly bitter, ironic, and pessimistic tone as John becomes more educated about the State. This is clearly seen as he repeats those very words in Chapter 11 at the sight of dozens of identical twins in a factory. John's participation in the final orgy and his suicide at the end of the novel can be seen as the result of an insanity created by the conflict between his values and the reality of the world around him. In Toni Morrison's novel, The Bluest Eye, Pecola is the protagonist. Even though this may be true, she is passive and remains a mysterious character throughout the novel. In fact, it is Claudia MacTeer who is the primary narrator. Morrison explains in her novel's afterword that she purposely tells Pecola's story from other points of view. She does this to keep Pecola's dignity and, to some degree, her mystery intact. Morrison wishes to prevent us from labeling/stereotyping Pecola or prematurely believing that as readers, they may understand her. Pecola is a very fragile and delicate child when the novel begins, and by the novel's close, she has been almost completely destroyed by violence. ...read more.

Pecola is also a symbol of the black community's self-hatred and belief in its own ugliness. Others in the community, including her mother, father, and Geraldine, act out their own self-hatred by expressing hatred toward her. At the end of the novel, we are told that Pecola has been a scapegoat for the entire community. Her ugliness has made them feel beautiful, her suffering has made them feel comparatively lucky, and her silence has given much to talk about. But because she continues to live after she has lost her mind, Pecola's aimless wandering at the edge of town haunts the community, reminding them of the ugliness and hatred that they have tried to suppress. She becomes a reminder of human cruelty and a symbol of human suffering. Both characters are brought into a restrictive society that leads them on to a life of madness, and in John's case: death. John's suicide result of an insanity created by the conflict between his values and the reality of the world around him. As for Pecola, she simply goes into the state of insanity. However, as stated earlier, her fate is much worse than death because she must continue to live in that insanity rather than be released from it. ...read more.