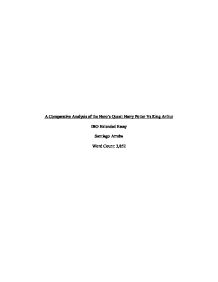 A Comparative Analysis of the Hero's Quest: Harry Potter Vs King Arthur IBO Extended Essay Santiago Arroba Word Count: 3,852 ABSTRACT From the pages of literature many ideas are born. Often these ideas are borrowed, passed down and transferred from work to work; author to author. This has led many to conclude that a generic mold has been established for certain ways of telling-or in some cases retelling-a story, and that authors often write to fit this mold, whether purposefully or not. The main mold discussed by celebrated novelists such as Joseph Campbell, and used frequently by renown authors like J.K. Rowling and T.H. White, is that of the classic hero. Rowling has made her young protagonist, Harry Potter, very similar to the King of Camelot, as presented by the many Arthurian authors, including T.H. White and Sir Thomas Mallory. There are a great deal of parallels between Potter and Arthur and I have analyzed the plot and other aspects of both stories-along with the works of critics and researchers like Campbell-to demonstrate the shocking similarities between the two heroes. The amazing similarities from both stories spawn from the constant recycling of the hero and his quest. Harry Potter as a person, is a very dynamic character with complete mood changes and varying personalities, yet when it comes to his adventures he is not at all unique. King Arthur, as a hero, is a very dynamic character but as a person he is flat and boring. To compare both I read the complete Harry Potter Series by J.K. Rowling ( Harry Potter and the Sorcerer's Stone, Harry Potter and the Chamber of Secrets, Harry Potter and the prisoner of Azkaban, Harry Potter and the Goblet of Fire, Harry Potter and the Order of the Phoenix, Harry Potter and the Half-Blood Prince, and Harry Potter and the Deathly Hallows.), I've read the authoritative Arthurian legends (The Sword in the Stone, by T.H White, and Le Mort d'Arthur by Sir Thomas Mallory.) ...read more.

the one with the power to vanquish the Dark Lord will be born as the seventh month dies..." So once again Harry was made the only one capable of saving the world from the evils of Marvolo Riddle, or Lord Voldemort. The power which he had that Voldemort knew nothing about was his deceased mother's love, which made it possible for baby Harry and teenage Harry to thwart Voldemort on every attempt he made to conquer the wizarding world. In the final part of J.K Rowling's thrilling series Harry vanquishes Lord Voldemort once and for all, therefore fulfilling his prophecy and saving "his people." Arthur also was presented as a hero and savior for his subjects. According to Geoffrey of Monmouth, historian and author of History of the Kings of Britain, around 1100 Britain was overrun by Saxons, Picts, and Scots. Arthur came about due to the subdued and downtrodden imaginations of the British people. Whenever a people are subject to tyranny they create heroes and saviors. Arthur was the product of poverty, hunger and injustice, so in the Arthurian legends he is the ultimate hero, the total savior and the peace bringer of Camelot. Another similarity between both heroes is that Arthur is helped on his way to victory by the legendary Sword Excalibur, and Harry defeated Lord Voldemort with the aid of The Elder Wand. As both novels developed the presences of many characters guide the protagonists in the right direction, but none more so than their mentor and protector. For Harry it is Albus Percival Wulfric Brian Dumbledore, and for Arthur it is the enigmatic Merlin. Harry was hidden for his own safety by Dumbledore and throughout the whole series he was nudged in the right direction by him. In the Philosopher's Stone, Dumbledore tells Harry how the Mirror of Erised works, in the Chamber of Secrets he sends Fawkes to rescue him from Slytherin's Heir and the basilisk, in The Prisoner of Azkaban he gives Hermione the Time Turner...there are a cornucopia of examples on how Dumbledore is always helping Harry along the way. ...read more.

Like Harry and Arthur, who did not choose their future, and never wanted fame and glory, the true hero does things alone. There exists many parallels between both heroes and in finality we can conclude that this is no mere coincidence. Rowling must have intended to at least base her protagonist off of Britain's greatest hero: King Arthur. The reason that J. K. Rowling is able to put so much life and actuality in her writings is that she herself has experienced much of what she writes. She was born on July 31st, 1965 in Gloucestershire, England. Divorced and living off of welfare Rowling wrote Harry Potter and the Philosopher's Stone on a napkin between her daughter's naps. When Harry Potter and the Philosopher's Stone was published her life changed. Much like Harry's life, Rowling's has the characteristics of a fairy tale. Barely making a living she managed to get by and lived in a small apartment flat in Edinburgh, where she says she was rescued by Harry Potter. She was given money to finish her books and has since become richer than even the Queen. She has written the harshness and nightmares of her pre-Potter life into her books, which is why they appear so real. Whenever a people live an oppressed lifestyle they create saviors to rescue them, which is what J.K did. T.H White, on the other hand lived a pretty well off life, yet displeased with the world he too re-made a hero for himself, Arthur. There isn't much in common between both authors other than their British descent and the fact that they write. Their language is also very similar and the way they write is strikingly alike. Perhaps it's the fact that they both attended Exeter college? In the quest for literary glory, both authors overcame tremendous upheaval and problems of a bad economic start. Yet they both wrote novels that changed mankind, and that continued the Hero's journey through literature. It is certain true then, that "There is only one hero, and he has a thousand faces" (HWTF, Campbell). ...read more.