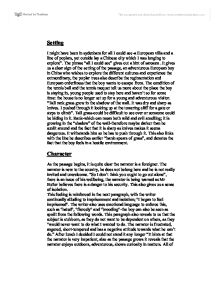 Setting I might have been in sydenham for all I could see-a European villa and a line of poplars, yet outside lay a Chinese city which I was longing to explore". The phrase "all I could see" gives out a hint of sarcasm .It gives us a clear sign of the setting of the passage, an adventurous European boy in China who wishes to explore the different cultures and experience the extraordinary, the poplar trees also describe the regimentation and European orderliness that the boy wants to escape from. The condition of the tennis ball and the tennis racquet tell us more about the place the boy is staying in, young people used to stay here and haven't so for some time: the house is no longer set up for a young and adventurous visitor. "Tall rank grass grew in the shadow of the wall. It was dry and sharp as knives. I pushed through it looking up at the towering cliff for a gate or steps to climb". ...read more.

All of the above signs imply as an indicator towards the narrator's youthfulness, hence the narrator can be seen as a boy. Style "Everything was still and silent, in an early afternoon torpor. The only sound came from the stunted bushes which squeaked and grated linguistically, as the wind passed through them. Pillars and scarves of dust and sand rose up from the ground, eddying and swirling themselves into flat sheets which hovered in the air. Harsh spears of grass stuck up through the sand"- still and silent, sets an example of alliteration. The landscape is in a state of torpor as it feels sleepy; the bushes emit sounds like harsh human speech (they 'squeaked and grated linguistically'); the dusts and sands behave as if they can control their movements; and the grass is like 'spears' which 'stuck up through the sand', also if they were doing it on their own volition, as an act of aggression. The phrase "tinged with horror "suggests that in the boys eyes even the colour of the scenery has changed. ...read more.

is written in such a subtle way, it does not take away the suspense which is built up over the course of the passage. Imagery further accentuates this feeling of possible catastrophe as the Welch's vivid descriptions throughout the passage articulate the harshness of the land that surrounds the narrator. From the very beginning of the passage, the speaker's reference to "a European villa and a line of poplars" which signifies order and beauty seems to contrast with the Chinese city that lies longing to explore. The imagery used to explain the Human body is very explicit and offers a very graphic imagination in your head. "There was no gate. I began to feel desperate. I ran towards a bastion, wondering if I could climb up to it any way knew that I could not" The writer uses desperation to contrast it at the beginning and at the end of the passage. At the beginning the boy is desperate to get out of the house to explore the city, but rather after the peculiar events the boy is desperate to get back to the house. ...read more.