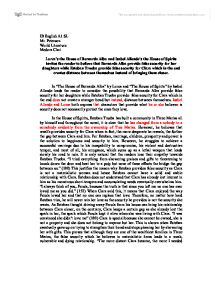 False security for House of Spirits and House of Bernarda Alba

"I was convinced she didn't love me" (180) Clara is special because she cannot be owned, she is not a property and she does not belong to anyone but her. This is shown when Esteban eventually gave up on trying to strengthen their bond and stops pleasing her by showering her with gifts. This proves that although they are one of the wealthiest families in Three Marias, the false security which he believes is materialistic items leads to a weak, vulnerable and dying relationship. "The more distant Clara became, the more I needed her love. Her spirit wasn't with me." (177) This evidently shows the fact that Esteban believes his sense of security by buying her gifts can eventually bring Clara close to her, reflects the shallowness of Esteban's thinking because since Clara's spirit is not with him, it is almost impossible for him to catch her attention. As Clara slowly changed and tries to avoid Esteban after the earthquake, the more he needed her love, providing her false security, hence, his overwhelming personality drove Clara further away from him. "I could see that she was pulling away from me. ...read more.

As the marriage is the only solution to freedom, once she said she knows she will not be marrying, she believes she will be trapped in what is called a home but more like a prison as it is surrounded by tall walls. "None of them has ever had a beau and they've never needed one! They get along very well......The men in this town is not of their class" (168) The confidence in Bernarda's tone shows what she believes is right to an extent what she says is almost like a rule. Poncia in this story somehow provides joy entertainment in the home for the daughters, the more Bernarda disagrees with Poncia, the closer the daughters are with their relationship between Poncia. Through the two novel's relationships between the characters, Isabelle Allende and Lorca give "false security" its shape and meaning. It is almost like a dark force of security, the security the one doesn't feel safe but trapped, it is the shape of a cube, impossible to escape. The authors in a way shows that no one can have everything, if the characters want power, then he or she will have to give up on love and vice versa. ...read more.