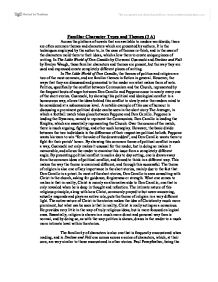 Familiar Character Types and Themes (3 A) Across the plethora of novels that are available to readers worldwide, there are often common themes and characters which are presented by authors. It is the techniques employed by the author to, in the case of themes re-think, and in the case of the characters mold them to their ideas, which allow them to create unique pieces of writing. In The Little World of Don Camillo by Giovanni Guareschi and Decline and Fall by Evelyn Waugh, these familiar characters and themes are present, but the way they are used and expressed create completely different pieces of writing. In The Little World of Don Camillo, the themes of politics and religion are two of the most common, and are familiar themes in fiction in general. However, the ways that they are discussed and presented to the reader are what makes them of note. ...read more.

The theme of religion is also one of key importance in the short stories, mainly due to the fact that Don Camillo is a priest. In most of the short stories, Don Camillo is seen consulting with Christ in the church, asking for guidance, forgiveness or strength. What one comes to realise is that in reality, Christ is merely an alternative side to Don Camillo, one that is only revealed when he is deep in thought and reflection. The intimate nature of this religious principle, along with how Christ, commonly prayed to but never answering, actually responds and plays an active role, puts the theme of religion in a very different light. The active nature of Christ in the stories makes the idea of Christianity much more prominent, but what can be seen is that in reality, Christ is really acting as a conscious. He provides very little in the way of truly religious ideas, but is more focused on logical ones. ...read more.

Beste-Chetwynde. And this continues, up until the end of the story when he returns to Scone as a new person. By doing this, the reader begins to focus on the overall story, rather than just Paul and his experiences. Waugh is able to use the many other characters to supplement Paul's emptiness, and thus create an integral character without developing him at all. By doing so, Waugh takes a familiar character, and reshapes him into a role that is rarely seen. Essentially, these two books, thematically in the case of The Little World of Don Camillo and characteristically in the case of Decline and Fall, take familiar themes and characters and mold them to their respective stories. By changing the ways that key themes are presented in The Little World of Don Camillo, and the way a bland character is used, the respective writers take familiar literary occurrences an make them into unique ones. In doing so, they make their stories successful, and cause the reader to consider these familiar themes and characters in a different light. ?? ?? ?? ?? ...read more.