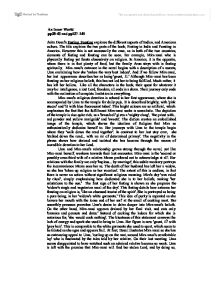 An Inner World pp38-43 and pp137-140 Anita Desai's Fasting, Feasting explores the different aspects of Indian, and American culture. The title explains the two parts of the book, Fasting in India and Feasting in America. However this is not necessarily the case, as in both of the two countries, elements of fasting and feasting can be seen. For example, Mira-masi who is physically fasting yet feasts obsessively on religion. In America, it is the opposite, where there is in fact plenty of food, but the family Arun stays with is fasting spiritually. Mira-masi's entrance in the novel begins with a description of a sweets, Uma exclaiming how she 'makes the very best ladoos'. And if we follow Mira-masi, her last appearance describes her as being 'gaunt, ill.' Although Mira-masi has been feasting on her religious beliefs, this has not led her to being fulfilled. Much rather, it has left her hollow. Like all the characters in the book, their quest for whatever it may be: intelligence, a lost Lord, freedom, all ends in a sham. Their journey only ends with the realisation of complete limitation in everything. Mira-masi's religious devotion is echoed in her first appearance, where she is accompanied by Uma to the temple for daily puja. It is described brightly, with 'pink stucco' and 'lit with blue fluorescent tubes'. This bright colours are so artificial, which emphasises the fact that the fulfillment Mira-masi seeks is unrealistic. The depiction of the temple is also quite rich, as a 'brass bell' gives a 'mighty clang', 'the priest with.. red powder and yellow marigolds' and 'sweets'. The diction creates an embellished image of the temple, which shows the idealism of Religion that Mira so enthusiastically dedicates herself to. Her journeys with Uma to the temple begin where they 'walk down the road together'. In contrast to her last stay over, she 'stalked down the road... ...read more.

Papa responds to this by 'never stopped reminding the women in the family' about the dowry that he 'had already thrown away' for the Uma's previous marriage scam. 'Never' is used to signify Papa's strong emphasis on the money given away - he does not care whether his 'burden' of a daughter gets a good husband. He is simply a money worshipper, which is a complete damnation of him. On the other hand, 'and so the bridegroom's party was on its way' after the dowry 'was accepted with alacrity'. These short sentences with the noun 'alacrity' give off a sense of suspicion - why would a person suddenly accept Uma and organize such a hasty wedding after such a long time of rejection? Once again, when compared to Aruna's who had an 'elaborate sari and jewellery' at her 'lavish' and 'splendid' wedding , Uma's 'drab, cut-rate affair' is inferior again with Uma finding 'herself richer' by only 'a dozen saris, a set of gold jewellery and another of pearls'. Uma 'then was handed a garland and posted at the entrance to the marquee to wait for the bridegroom'. Unlike the normal teary blessings given prior to a marriage, Uma was not greeted with any of this for this rash wedding. The negative diction depicting the bridegroom's reaction towards Uma, like: 'glumly', 'without much interest', 'reluctant', 'sullen bridegroom' all convey an aura of forced willingness and foreshadows this couple's upcoming divorce. The anonymity of Uma's spouse gives a sense that he is some insignificant, blurry utility man in a swift chapter of Uma's life. The 'wilting garland' is also symbolic of this marriage - it is 'wilting' before it even started. The high level of boredom during the wedding ceremony is highlighted through Uma's pathetic sole entertainment being her 'tinkling her many new glass bangles gaily' due to the absence of Ramu, a motif of Uma's happiness and hope. ...read more.

Also, I notice how Mr and Mrs Patton are always separated as if they are different entities as opposed to MamaPapa and again reiterate the rift between members of the Patton family. It also demonstrates the difference in American and Indian cultures. Desai uses irony of a situation in order to convey to readers the comical state of American's beliefs. For example, in "Will Mrs Patton be brave and make it unnecessary for him to speak, publicly reveal himself as unworthy, unfit to take the wafer upon his tongue, the wine into his throat?", the objects wafer and wine which are a reference to holy communion are "unfit for Arun's mouth". Desai is trying to convey here that being a vegetarian is regarded as a sin in America and he has to "confess- again" to Mr Patton. The irony of the situation is that the wafer and wine are also food. This bombardment leaves readers feeling that Americans are devoted to food as their religion. Another situation in this extract that this reader found rather amusing was the portrayal of Melanie "gorging on peanuts" My first association with peanuts is when they are rewarded to elephants as payment when they are used as a mode of transport in India. This is very shrewd of Desai as she compares Melanie, who is trying to be as skinny as possible, is compared with something as large as an elephant. Also, the fact that she is "gorging" on peanuts again represents the American frame of mind. Even a girl focused on fasting to achieve slimness cannot help but continue on feasting. Food and "religion" play a central role in this extract; which mirrors how Americans regard the almost pious ritual of feasting as the epicentre of their lives. This is reinforced by the fact that Mrs Patton feels "unfit to take the wafer upon his [Arun's] tongue" and "[Mr Patton] drove home half an hour early so's to marinate the steaks" Desai makes this reader feel as if Mr Patton is having to worship food because of the lack of a religion. ...read more.