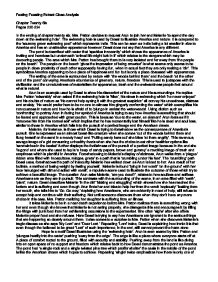 Fasting Feasting Extract Close Analysis Chapter Twenty Six Pages 220-224 In the ending of chapter twenty six, Mrs. Patton decides to request Arun to join her and Melanie 'to spend the day down at the swimming hole'. The swimming hole is used by Desai to illustrate America and nature. It is compared to the 'scummy green swimming pool' which represents India. This can be seen as India being a lot smaller in size to America and has an unattractive appearance however; Desai does not say that America is any different. The pond is described with water that 'sparkles innocently' which shows the appearance of America is inviting and harmless but underneath 'animal life might lurk in it' which relates to the dangers which may be devouring people. The area which Mrs. Patton has brought them to is very isolated and far away from 'the people on the beach'. The people on the beach 'gives the impression of being crowded' is what seems only seems to be people in close proximity of each other supposedly having fun, when in actual fact they are only making a 'din'. This symbolizes America appearing to be a place of happiness and fun but is only a place obsessed with appearances. The setting of the area is surrounded by nature with 'the woods behind them' and the beach 'at the other end of the pond' conveying America's abundance of greenery, nature, freedom. ...read more.

As a result of her bulimia, a method of losing weight by fasting yourself, Melanie is found 'lying in her vomit' 'on the ground' with her face 'smudged with dirt and soiled with vomit', a repulsive scene used to illustrate the outcome of those which try to achieve a beautiful image. The question Arun asks Melanie, 'are you dead?', relates to how soulless and selfless Americans are as they are in pursuit. This contrasts with the surrounding of the scene, in an area filled with 'earth', 'plant', nature. Desai describes Melanie 'in the dirt' 'kicking and struggling' which shows how she has reached the bottom and is suffering and even though Arun finds her and tries to help her from the vomit 'copiously' 'leaking form her mouth, she tells him to 'Go. Go way,' depicting how Americans, who are evidently in need of help, still refuse to accept help and continue with their suffering. Not until someone discovers them when they don't have any more choice in this case, Mrs. Patton realizing her daughter is suffering from an illness. It takes Melanie to be in a near-death experience before Mrs. Patton realizes there is something wrong with her and even though she knows that Melanie is not eating properly, she disregards this and encourages it by filling the fridge with junk food from her exhilarating excursions to the supermarket. ...read more.

It also is a sentence which isn't very descriptive leaving the reader the freedom of imagination and adding on later in the paragraph more and more details producing a clearer image that does not result in something attractive like in Melanie's vomiting scene. The beginning of the extract starts from Mrs. Patton, Arun and Melanie looking down 'Below' to the swimming how whereas at the end Mrs. Patton is saying 'My dear Lord' which connotes to looking upwards towards heaven. It gives the reader a feel of having fallen downwards looking up for hope to find something that can save them from above. Eventually, as the issue of Melanie's eating disorder and Mrs. Patton's obvious unawareness of it all surfaces, the reality and truth unravel. Desai uses descriptions of 'scenes in a film' with 'a maiden at the feet of the hero, crying' but in fact, the 'maiden' at his feet is not crying tears of joy from his rescue but is a damsel in distress which isn't 'reduced to black and white' screen America is famous for producing but it is in a 'three-dimensional' form which is as real as can be and all those images in the 'cinema' 'are not the stuff of dreams'. She is trying to tell us the harsh reality of what is occurring and that Arun 'is not the hero' even though he is the one that notices and realizes Melanie's disorder. Everything is real, 'real pain and' 'real hunger' exists in America, a country of feasting, with everyone fasting. Tisha Yap 6C2 ...read more.