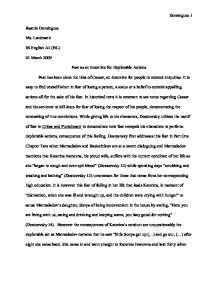 Fear as an Incentive for Deplorable Actions

Beatriz Domingues Ms. Landmark IB English A1 (HL) 01 March 2009 Fear as an Incentive for Deplorable Actions Fear has been since the time of Caesar, an incentive for people to commit iniquities. It is easy to find oneself when in fear of losing a person, a status or a belief to commit appalling actions all for the sake of his fear. In historical texts it is common to see notes regarding Caesar and his sentence to kill Jesus for fear of losing the respect of his people, demonstrating the concealing of true convictions. While giving life to his characters, Dostoevsky utilizes the motif of fear in Crime and Punishment to demonstrate how fear compels his characters to perform deplorable actions, consequence of this feeling. ...read more.

and go out, (...) after eight she came back. She came in and went straight to Katerina Ivanovna and laid thirty silver roubles on the table without a word" ( Dostoevsky 14), illustrating Sonya's self sacrifice, repercussion of Katerina's words. Dostoevsky further exemplifies fear as a compelling factor to commit deplorable acts as he describes Luzhin's dependence on Dunya for being a person who feels indebted to him for saving her untruthfully blemished reputation and his reaction when losing her. In fear of not retaining her back, Luzhin decides to prove Raskolnikov wrong in his assertions since it was he who had convinced both Pulkheria and Dunya that Luzhin was not truly in love with her after being consumed by anger after being defied when Dunya is accompanied by both to meet him. ...read more.

Through a conversation between Porfiry, Razumikhin and Raskolnikov, Dostoevsky with precise diction states through the mouth of Porfiry, Raskolnikov's greatest fear of being ordinary as he says, "All men are divided into 'ordinary' and 'extraordinary'. Ordinary men have to live in submission, have no right to transgress the law, because , don't you see they are ordinary. But extraordinary men have a right to commit any crime and to transgress the law in any way, just because they are extraordinary." This is the fear that drives Raskolnikov to ascertain his state of superiority like Napoleon and to commit, without great thought the murder of Alyona, his deplorable action that shows him he is nothing but 'ordinary'. Dostoevsky then illustrates through the characters of Katerina Ivanovna, Peter Petrovich Luzhin and Rodnya Raskolnikov how it is unchallenging to find oneself when in fear of losing a status, a person or a belief to commit disgraceful actions, consequence of this feeling. ...read more.