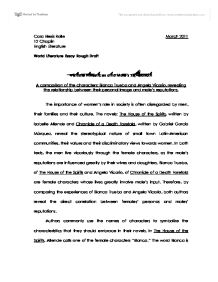 Female Influences on a Males Reputation

Cara Elexis Rolle March 2011 12 Chaplin English Literature World Literature Essay Rough Draft Female Influences on a Male's Reputation A comparison of the characters: Blanca Trueba and Angela Vicario, revealing the relationship between their personal image and male's reputations. The importance of women's role in society is often disregarded by men, their families and their culture. The novels: The House of the Spirits, written by Isabelle Allende and Chronicle of a Death Foretold, written by Gabriel Garc�a M�rquez, reveal the stereotypical nature of small town Latin-American communities, their values and their discriminatory views towards women. In both texts, the men live vicariously through the female characters, as the male's reputations are influenced greatly by their wives and daughters. ...read more.

In The House of the Spirits, Allende calls one of the female characters "Blanca." The word Blanca is derived from Latin terms meaning white. It can be inferred that Allende uses the name "Blanca" to reveal the purity and honor that this female character should represent. Allende further uses strong diction to emphasize the holiness that the female character Blanca Trueba should portray by describing her as, "a romantic, sentimental child, with a preference for solitude ..., [who] was considered timid and morose," [Allende 143]. Similarly, in Chronicle of a Death Foretold, Garc�a M�rquez names one of the protagonists of her novel, "Angela Vicario." ...read more.

[Garc�a M�rquez 34] Furthermore, Garc�a M�rquez uses listing and strong diction to describe the customs that Angela's mother, Pura Vicario, instills in her from a child, such as: "screen embroidery, sew by machine, weave bone lace, wash and iron." [Garc�a M�rquez 31] Allende also described the diverse treatment of the male and female siblings in The House of the Spirits. As a child Blanca is sent to a convent school, "a school for girls from good families which is operated by nuns." [Allende 142] The education is a religious education which instills in young women how to be Christians and it is meant to protect and preserve the girls' virginity until they are married. ...read more.