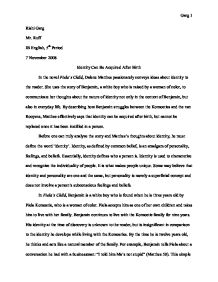 Rishi Garg Mr. Ruff IB English, 5th Period 7 November 2008 Identity Can Be Acquired After Birth In the novel Fiela's Child, Dalene Matthee passionately conveys ideas about identity to the reader. She uses the story of Benjamin, a white boy who is raised by a woman of color, to communicate her thoughts about the nature of identity not only in the context of Benjamin, but also in everyday life. By describing how Benjamin struggles between the Komoeties and the van Rooyens, Matthee effectively says that identity can be acquired after birth, but cannot be replaced once it has been instilled in a person. Before one can truly analyze the story and Matthee's thoughts about identity, he must define the word 'identity'. Identity, as defined by common belief, is an amalgam of personality, feelings, and beliefs. Essentially, identity defines who a person is. Identity is used to characterize and recognize the individuality of people. It is what makes people unique. Some may believe that identity and personality are one and the same, but personality is merely a superficial concept and does not involve a person's subconscious feelings and beliefs. In Fiela's Child, Benjamin is a white boy who is found when he is three years old by Fiela Komoetie, who is a woman of color. ...read more.

He even tries to force Benjamin to change his name to 'Lukas'; "Greet your brother and sister, Lukas!" says Elias impatiently. Elias also forces Benjamin to join in the family trade of making beams. The strength of the identity Benjamin gained while living with the Komoeties is tested by the van Rooyens. Eventually, after many years of living with the van Rooyens, Benjamin learns to accept and understand the family. When the setting of the novel jumps forward a few years, the reader sees that Benjamin refers to Elias as 'Pa' and Barta as 'Ma'. Matthee hints to the reader that Benjamin's identity has been cloaked by referring to him not as 'Benjamin', but simply as 'he' or 'him'. However, while he is 'Lukas' in all superficial respects, he is still Benjamin at heart. When Benjamin is talking to Miss Weatherbury about collecting Nina's wages each month, he thinks: "Miss Weatherbury was right, why did they have to take ... [Nina's] money? But Miss Weatherbury did not have to go and say so at Barnard's Island" (Matthee 245). 'Barnard Island' is where the van Rooyens live. By writing these lines, Matthee gives the reader has a glimpse into Benjamin's personal opinions. Benjamin does not agree with Elias' mandate, and believes that Nina should be allowed to keep her own hard-earned money. ...read more.

"He had made up his mind, Lukas was going to work on the beams" (Matthee 130), Matthee says of Elias. Also, the Komoeties genuinely loved Benjamin, whereas most of the van Rooyens harbored only feelings of annoyance toward him. By creating this severe contrast between the two families, Matthee successfully describes what she believes are the requirements for the acquisition of a true identity: a loving, caring environment. Another reason why Benjamin's identity was not changed while in the company of the van Rooyens is simply that he was no longer a young boy when he was incorporated into their family; older children are not nearly as impressionable as younger children, and it is not likely that Benjamin's identity would have changed while in the company of the van Rooyens even if they had treated him with the same love and respect he received from the Komoeties. Lastly, because Benjamin had already acquired a genuine identity while living with the Komoeties, he did not need an additional or replacement identity. Benjamin's story is, in essence, the story of a boy who is searching for his true identity. In a way, his struggle to find his identity is something that all people experience in their lives. The irony is that, oftentimes, the identity that a person is searching for so painstakingly is usually right there, directly in front of him the entire time. ?? ?? ?? ?? Garg 1 ...read more.