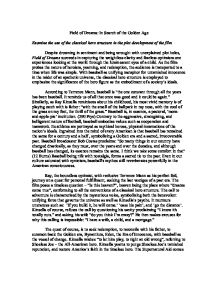 Field of Dreams: In Search of the Golden Age

Field of Dreams: In Search of the Golden Age Examine the use of the classical hero structure in the plot development of the film Despite drowning in sentiment and being wrought with unexplained plot holes, Field of Dreams succeeds in capturing the weightless clarity and fearless optimism one experiences looking at the world through the luminescent eyes of a child. As the film probes the nature of heroism, yearning, and redemption, the audience is transported to a time when life was simple. With baseball as unifying metaphor for untarnished innocence in the midst of an apathetic universe, the classical hero structure is employed to emphasize the significance of the hero figure as the embodiment of a society's ideals. According to Terrence Mann, baseball is "the one constant through all the years has been baseball. It reminds us of all that once was good and it could be again." ...read more.

Baseball being rife with nostalgia, forms a sacred tie to the past. Even in our culture saturated with cynicism, baseball's mythos still reverberates powerfully in the American consciousness. Ray, the boundless optimist, with reclusive Terrence Mann as his perfect foil, journey on a quest for personal fulfillment, seeking the last vestiges of a past era. The film poses a timeless question - "Is this heaven?", heaven being the place where "dreams come true", conforming to all the conventions of a classical hero structure. The call to adventure is characterized by the mysterious voice, symbolizing both the benevolent unifying force that governs the universe as well as Kinsella's psyche. It murmurs utterances such as: 'If you build it, he will come.' 'ease his pain', and 'go the distance'. Kinsella of course, refuses the call by questioning his sanity proclaiming "I know it's totally nuts." ...read more.

The Goddess is his endearingly feisty wife Annie. And the hero is Ray himself. Lastly, the Atonement with the father comes in the form of Kinsella's father appearing on the field. Previously, Kinsella had expressed regret for his father having died before meeting his grandchild and his wife. During an argument, Kinsella declared to his dad: "I'll never respect a man whose hero was a criminal", referring to Shoeless Joe's allegations of throwing the World Series. "I never forgave him for getting old. He must have had dreams, but he never did anything about them. For all I know, he may have even heard voices too, but he sure didn't listen to them." Finally, Kinsella is able to satisfy his yearning for reconciliation in the form of playing one last game of catch with his father. Blending the elements of nostalgia, pop mysticism, and timeless innocence in an era of moral decay, Field of Dreams establishes the universal need for a hero as one of the most fundamental necessities characterizing the human condition. ...read more.