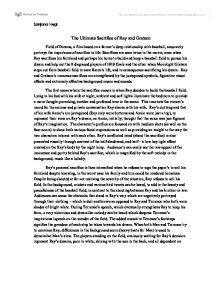 Field of Dreams The Ultimate Sacrifice of Ray and Graham

The Ultimate Sacrifice of Ray and Graham Field of Dreams, a film based on a farmer's deep relationship with baseball, accurately portrays the importance of sacrifice in life. Sacrifices are seen twice in the movie, once when Ray sacrifices his farmland and perhaps his home to build and keep a baseball field to pursue his dream and help out the 8 disgraced players of 1919 finals and the other when Moonlight Graham steps out from baseball field to save Karen's life, and in consequence sacrificing his dream. Ray and Graham's immense sacrifices are strengthened by the juxtaposed symbols, figurative visual effects and extremely effective background music and sounds. The first scene where the sacrifice occurs is when Ray decides to build the baseball field. Lying in his bed with his wife at night, ambient and soft lights illuminate the bedroom to provide a more thought provoking, somber and profound tone to the scene. ...read more.

Ray's personal sacrifice is then intensified when he refuses to sign the paper's to sell his farmland despite knowing, in the worst case his family and him could be rendered homeless. Despite being shouted at for not realizing the severity of the situation, Ray refuses to sell his field. In the background, crickets and various bird tweets can be heard, to add to the beauty and peacefulness of the baseball field, in contrast to the shouting between Ray and his brother-in-law. Audiences can sense the obstacles that stand in Ray's way which are negatively portrayed through their clothing - which is dull and brown as opposed to Ray and Terrence who both wore shades of bright white. During Terrence's speech, which eventually strengthens Ray to keep his farm, a very victorious and dreamlike melody can be heard which deepens Terrence's inspirational speech on the wonder of the field. ...read more.

the finally climaxing as he crosses over, shows the power of Graham's decision as while he gave up his life's greatest dream, Karen could have died had he not. Camera zooms into Graham's feet which hesitate for a minute to cross the line and to his panting body as he realizes the correct choice. The glove being thrown on the ground is a symbol to him throwing his dreams away to save Karen. Audiences feel amicability and some pity for the good soul who threw away his ultimate goal to save another's. In the final analysis, both Ray and Moonlight Graham sacrificed a vital part of their beings for each other's sake and in the end both accomplished what they desired. Phil Robinson, the director, evokes strong emotional responses from audiences through his use of background music, juxtaposition and symbolized visual effects to portray the inevitability of sacrifice in life. isHisAll ?? ?? ?? ?? Sanjana Negi ...read more.