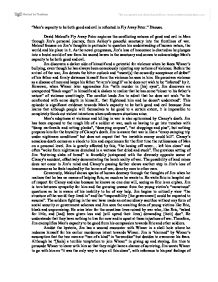 "Man's capacity to be both good and evil is reflected in Fly Away Peter." Discuss. David Malouf's Fly Away Peter explores the conflicting natures of good and evil in Man through Jim's personal journey, from Ashley's peaceful sanctuary into the frontlines of war. Malouf focuses on Jim's thoughts in particular to question his understanding of human nature, the world and his place in it. As the novel progresses, Jim's loss of innocence is charted as he plunges into a brutal world of war from his sacred haven in the sanctuary and comes to acknowledge Man's capacity to be both good and evil. Jim discovers a darker side of himself and a potential for violence when he faces Wizzer's bullying, even though he has always been consciously rejecting any notions of violence. Before the arrival of the war, Jim detests the bitter outlook and "resent[s] the cowardly acceptance of defeat" of his father and firmly distances himself from the violence he sees in him. He perceives violence as a disease of men and keeps his father "at arm's length" as he does not wish to be "infected" by it. ...read more.

Clancy's senseless death comes as a shock to him and experiences for the first time the ruthlessness of Man on a personal level. Jim is greatly affected by this; "the hosing off never... left him clean" and often "woke from nightmares drenched in a wetness that dried and stuck". The previous setting of Jim "buttering slabs of bread" is forcefully juxtaposed with the diversely opposite scene of Clancy's accident, effectively demonstrating the harsh reality of war. The possibility of land mines does not occur in Jim's mind and Clancy's passing further shows another step in Jim's loss of innocence as he feels touched by the horrors of war, done by men to other men. Conversely, Malouf shows sparks of human decency through the thoughts of Jim when he realizes that he has no means of helping Eric, as much as he wants to. He visits Eric in hospital out of respect for Clancy and also because he knows no one else will, seeing as Eric is an orphan. Jim is torn between sympathy for him and the growing unease from the young victim's "monstrous" questions as he is aware of his inability to be of any help. ...read more.

Jim wants Wizzer to go with him as "it was the only way to wipe all this clean", with reference to his past feelings of violence towards Wizzer. Finally, Jim faces up to his cowardice, makes his way back on his own and feels "delivered into his own hands again, clean and whole". Having regained his personal integrity, Jim's willingness to be good even in dire circumstances as he has tried hard to save Wizzer, despite being unsuccessful, shows that Man has the capacity to do the right thing for honour and comradeship. The vast opposites of human nature are thoroughly explored in the novel, mostly through Jim's experiences with war and his friends that have a personal effect on him. His opinion of 'savagery' never wavers and he experiences this when Wizzer confronts him with the threat of brute force, with the vicious killing of Clancy, the absence of acknowledgement of the underrepresented soldiers involved in the war and the result of violence that can break a person's resolve to live. Through Jim's life in war, Malouf expands on the thoughts of various characters he comes into contact with and Man's capacity to be both good and evil in Fly Away Peter in detail. ...read more.