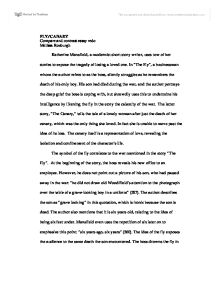 FLY/CANARY Compare and contrast essay redo Melissa Roxburgh Katherine Mansfield, a modernist short story writer, uses tow of her stories to expose the tragedy of losing a loved one. In "The Fly", a businessman whom the author refers to as the boss, silently struggles as he remembers the death of his only boy. His son had died during the war, and the author portrays the deep grief the boss is coping with, but shrewdly uses this to undermine his intelligence by likening the fly in the story the calamity of the war. The latter story, "The Canary," tells the tale of a lonely woman after just the death of her canary, which was the only thing she loved. In fact she is unable to move past the idea of its loss. ...read more.

The boss drowns the fly in the ink on his desk, returning it to the ink after it tries to escape. The soldiers of the war were returned to the battlefield again and again after fighting, only to lose their lives. It was the generation above them, the boss's generation that ultimately sent them to their death. They were unaware of the brutality they would face, just like the fly was unaware of the dangers of the ink. This story criticizes the ignorance of the boss's generation for plunging their sons into the war without full knowledge of its consequences. "The horrible danger was over, it had escaped; it was ready for life again," is a quotation that would describe the soldier's point of view. The soldiers were not thinking they were going to war to die, they stepped into a unexpected fate. ...read more.

The Canary is her only love. The author hints at the explination for this. The canary is a metaphor for love and as the author describes Missus as "the scarecrow" (371). This explains that she scares away birds, or love. However, it is ironic because the literal connection between Missus and her canary is not that she scares it away, but rather draws it close, unlike men in her life. Mansfield uses these two stories to contrast the happiness and sadness in the unfortunate situation of losing someone or something to death. As flies represent death more directly, the canary's death also is symbolic for the death of the woman's love and happiness. "The Fly" expresses death in the fact that the boss sent his son to die, and at the same time is dead in the fact that he is unable to move on. The limitations of the two main characters of the story are exposed to the audience through the author's use of symbolism in the two short stories. ...read more.