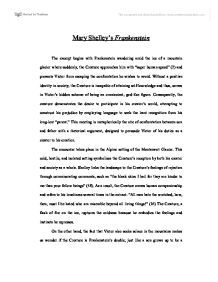 Mary Shelley's Frankenstein The excerpt begins with Frankenstein wandering amid the ice of a mountain glacier where suddenly, the Creature approaches him with "super human speed" (2) and prevents Victor from escaping the confrontation he wishes to avoid. Without a positive identity in society, the Creature is incapable of attaining self-knowledge and thus, serves in Victor's hidden scheme of being an omniscient, god-like figure. Consequently, the creature demonstrates the desire to participate in his creator's world, attempting to construct his prejudice by employing language to seek the least recognition from his long-lost "parent." This meeting is metaphorically the site of confrontation between son and father with a rhetorical argument, designed to persuade Victor of his duties as a creator to his creation. The encounter takes place in the Alpine setting of the Montanvert Glacier. This cold, hostile, and isolated setting symbolises the Creature's reception by both his creator and society as a whole. Shelley links the landscape to the Creature's feelings of rejection through commiserating comments, such as "the bleak skies I hail for they are kinder to me than your fellow beings" (48). ...read more.

Another dominating theme in this extract is injustice. The Creature, appeals to Victor's humanity stating that legal law allows a man a fair hearing before he is judged: "The guilty are allowed, by human laws, bloody as they are, to speak in their own defence before they are condemned." (56) He both demands and begs for the right to tell his story; a combination of pleading a legal case and redeeming himself before his father. Furthermore, Shelley's allusion of Victor as the rebel figure Prometheus, who defied the Gods by stealing fire from Mount Olympus to give life to humans and was subjected to slow painful torture, is evident here. The Creature returns to haunt him, threatening him with comments such as "I will glut the maw of death, until it be satiated with the blood of your remaining friends." (21). In addition, the Creature comes across as God's Adam, entering the world as an innocent creature. The Creature justifies this by stating "I was benevolent and good; misery made me a fiend." ...read more.

He reminds Victor, "Thou hast made me more powerful than thyself." (31)Despite, Victor calls him an "insect" (13), an image that seems more appropriately applied to Victor himself! This selection provides a blinding backdrop to the delayed meeting between Victor and his creature. At the end of the encounter, my sympathies for the Creature and Frankenstein change as they do several times throughout the novel. This jaw clenching scene is Shelley's most powerful critique of Frankenstein when she allows the Creature to tell his own story and desires. Alas, Frankenstein's feelings are emphasised by the words he uses, and he is to me, a prejudiced and heartless being. This passage could have also been used by Shelley to draw sympathy for the Creature. It is difficult to have pity on such an unsightly murderer like Frankenstein's creation, yet Shelley, through the usage of numerous literary devices, is capable of convincing me that he deserved compassion, not condemnation. Nonetheless, by reading this passage, I have learned that with the Creature, we are forced to confront both figurative and literal monstrosity; questioning ourselves, who really is the monster in this story? ?? ?? ?? ?? ...read more.