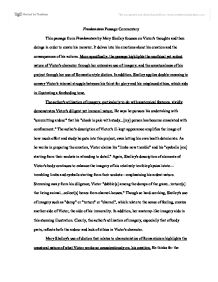 Frankenstein Passage Commentary This passage from Frankenstein by Mary Shelley focuses on Victor's thoughts and then doings in order to create his monster. It delves into his emotions about his creation and the consequences of his actions. More specifically, the passage highlights the unethical yet ardent nature of Victor's character through her extensive use of imagery, and the unnaturalness of his project through her use of Romantic-style diction. In addition, Shelley applies double-meaning to convey Victor's internal struggle between his thirst for glory and his misplaced ethics, which aids in illustrating a foreboding tone. The author's utilisation of imagery, particularly to do with anatomical features, vividly demonstrates Victor's diligent yet immoral nature. He says he pursues his undertaking with "unremitting ardour" that his "cheek is pale with study...[my] person has become emaciated with confinement." The author's description of Victor's ill-kept appearance amplifies the image of how much effort and study he puts into this project, even letting his own health deteriorate. As he works in preparing the creation, Victor claims his "limbs now tremble" and his "eyeballs [are] starting from their sockets in attending to detail." ...read more.

Life, death, light, and darkness are all elements of the Romantic period which Shelley uses in order to illuminate how absurd and almost iconoclastic Victor's work is. This purpose is explicitly stated when Victor contemplates, "...if I could bestow animation upon lifeless matter, I might in the process of time renew life where death had apparently devoted the body to corruption." Again, Shelley's use of the Romantic idea of "death", an element of nature, conveys the highly unnatural nature of Victor's project: an attempt to defy God's will. Working on his development, Victor calls his place of work a "workshop of filthy creation." As willed by nature, creation is the miracle of birth, a very grateful event to the parents a child is born from, and an important idea of natural Romanticism. Thus in Victor's case, his use of the word "filthy" for his creation portrays how unnatural the enterprise is. This passage also illustrates Victor's internal struggle between his will to achieve glory and his unethical behaviour through the use of double meaning, successfully creating an ominous tone. In the beginning, Victor reflects that he wills to defy nature's law that death is inevitable and irreversible so he can be a "creator" of a new species and achieve the glory that comes with it. ...read more.

He continues, "I collect bones from charnel-houses and disturb with profane fingers, the tremendous secrets of the human frame." In this case, the word "profane" can indicate contempt for God or simple indifference towards Him. Again, the author's application of this double meaning further conveys the uncertainty and conflict with morality within Victor. In addition, an ominous tone is created from the conflict having to do with gloomy subjects such as bones and charnel-houses. The utilisation of double meaning creates the internal struggle Victor has between his pursuit of glory and obedience to ethics which in turn produces a foreboding tone. The concepts brought up by Mary Shelley in this passage are applicable to almost anyone. All of us desire some form of glory and will often work very hard to achieve it but our innate sense to do the right thing will always get in the way, and it is our choice to abide by these rules or to disobey them and face the wrath of God. Indeed Victor is too blinded by his passion and his search for his own glory to listen to his ethics. Perhaps this foreshadows a time in the near future when God does strike back for Victor's attempt to defy the laws of nature. ?? ?? ?? ?? Parvathaneni 2 ...read more.