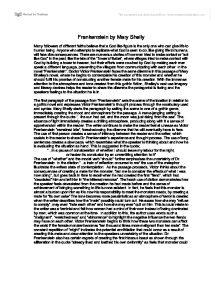 Frankenstein by Mary Shelly Many followers of different faiths believe that a God like figure is the only one who can give life to human being. Anyone who attempts to replicate what God is seen to do, like giving life to humans, will face dire consequences. There are numerous stories of how man tried to make contact or "act like God" in the past, like the tale of the 'Tower of Babel', where villages tried to make contact with God by building a tower to heaven, but their efforts were crushed by God by making each man speak a different language, preventing the villagers from communicating with each other. In the novel "Frankenstein", Doctor Victor Frankenstein faces the same dilemma in this passage of Mary Shelley's novel, where he begins to contemplate his creation of this monster and whether he should fulfil his promise of constructing another female mate for his creation. With the immense attention to the atmosphere and tone created from this gothic fiction, Shelley's vast use imagery and literary devices helps the reader to share the dilemma the protagonist is facing and the speakers feelings to the situation he is in. The first paragraph of the passage from "Frankenstein" sets the scene of the location in relation to a gothic novel and expresses Victor Frankenstein's thought process through the vocabulary used and syntax. ...read more.

This is highlighted in the quote; "I had been struck senseless by his fiendish threats: but now, for the first time, the wickedness of my promise burst upon me" It indicates a change in his character as well as intensifying the tone of panic in the paragraph as the mankind is now under threat if this "mate" is created. Towards the end of the second paragraph, Victor Frankenstein begins to see the further implications of destruction that could occur as the "future ages might curse him as their pest" as he could wipe out the "existence of the whole human race", creating world chaos. This could imply that he does not want to be seen as a failure in the eyes of humans but almost as an anonymous hero, as he wants to save the world from despair from the two monsters. The third paragraph brings Victor Frankenstein back to the real situation at hand as he is now forced to make a decision; to save mankind and the world or to please the creature he created. The first few words in the paragraph show Dr. Frankenstein's initial reaction when he sees the "daemon" as represented in the quote "I trembled and my hear failed me". Once more the gothic genre is represented through the setting as a horror scence is created by the writer once again, "I saw by the light of the moon, the daemon at the casement" The moon is almost seen to be used as a catalyst as it aids the main character in making his decision. ...read more.

The word "arrested" underlines the entrapment Doctor Frankenstein feels, as his state terror continues to brew. In the last paragraph, Mary Shelley creates an eerie atmosphere as the monster enters the room with only Dr. Frankenstein inside. The sinister mood is felt in the audience through the onomatopoeia in the word "creaking". This intensifies his fear, even though the door is opened "softly", which could that he maybe unnecessarily scaring himself. But the repetition of "trembled" throughout this passage shows how frightened he is of the situation he has got himself into as he "wished to rouse one of the peasants who dwelt in a cottage not far" The writer once again shows how he cannot escape from what could happen to him. He realises this and the danger that he is in as exemplified in the world "helplessness" In conclusion, Mary Shelley has successfully created a gothic fiction story where her extensive use of literary devices creates a mood a fear and intensifies the suspense through the passage. As said before, Mary Shelley may have used this story to show that by trying to do the work of God, there will be traumatic consequences before you. But as this story was set during the Industrial Revolution around the world, many may have sought to believe this as during this period, it felt that almost anything was possible, even creating life. ...read more.