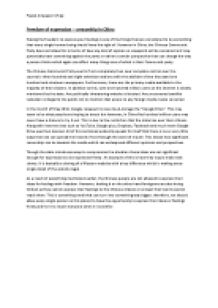 Freedom of expression and censorship in China

﻿Pawat Ampaporn (Tay) Freedom of expression ? censorship in China Having the freedom to express your feelings is one of the things that are considered to be something that every single human being should have the right of. However in China, the Chinese Communist Party does not allow this in terms of how any kind of opinion or viewpoint will be censored as it may potentially have something against the party or rather a certain perspective that can change the way a person thinks which again can affect many things one of which is their Communist party. ...read more.

Any politically threatening website is blocked. Any uncensored satellite television is illegal to the public not to mention that access to any foreign media is also censored. In the month of May 2012, Google released its new cloud-storage the ?Google Drive?. This may seem to be what people are hoping to tryout but however; in China five hundred million users may never have a chance to try it out. This is due to the restriction that the state has over their citizens. Along with internet sites such as YouTube, Google plus, Dropbox, Facebook and much more Google Drive was then banned. ...read more.

It is basically a cloning of a Western website with a key difference which is making every single detail of the website legal. As a result of everything mentioned earlier, the Chinese people are not allowed to express their ideas for feelings with freedom. However, looking it on the other hand foreigners are also being limited as they cannot express their feelings to the Chinese citizens or at least their words cannot reach them. This is something small that can turn into something way bigger, therefore, we should allow every single person on this planet to have the opportunity to express their ideas or feelings freely and for it to reach everyone when it is seek for. ...read more.