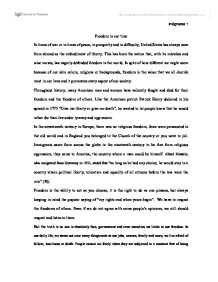 Freedom. The U.S. Constitution and its Bill of Rights bestow Americans freedoms and rights. I think today people are more likely to know the most popular songs, than the freedoms the Bill of Rights grants them. We cannot protect something that we do not u

Freedom in our time In times of war or in times of peace, in prosperity and in difficulty, United States has always seen from abroad as the embodiment of liberty. This has been the nation that, with its mistakes and wise moves, has eagerly defended freedom in the world. In spite of how different we might seem because of our skin colors, religions or backgrounds, freedom is the value that we all cherish most in our lives and it permeates every aspect of our society. Throughout history, many American men and women have valiantly fought and died for their freedom and the freedom of others. Like the American patriot Patrick Henry declared in his speech in 1775 "Give me liberty or give me death", he wanted to let people know that he would rather die than live under tyranny and oppression. In the seventeenth century in Europe, there was no religious freedom, Jews were persecuted in the old world and in England you belonged to the Church of the country or you went to jail. ...read more.

He acts because he is told to do so, without questioning the orders he receives, even if his actions go against his principles or harm people they care about or society. In the nations, governments control freedom through laws that citizens have to follow. Law is connected with human responsibility for his actions and it is a way to ensure that our society is fair to all. In order to make it possible for all of us to live in harmony, the law restricts some people's freedoms, in order to allow others to enjoy it. Freedom is a privilege that people too often take for granted. We seem no to value the lives that men and women sacrificed in battle for freedom and our rights. Without them, none of what we have now would be even possible. But when something is given to you, it does not mean as much to you if you would have earned it yourself, and in our case we were born with our freedoms handed. ...read more.

Freedom of speech and choice make people responsible for their words and actions. The freedom of the press exists in almost every country, although few nations have a press as free as the USA's. This freedom is not possible when people cannot own the printing, paper and ink like in Cuba, where the freedom of the press is substantially restricted. The radio stations and television cannot exercise liberty when the electromagnetic spectrum belongs to the State and the license might be revoked. Neither can freedom prevail when the Government buys the silence of the media with state propaganda or the justice permits thieves to sue journalists that denounce corruption. Americans enjoy the right to express themselves and to be informed about how they are being governed. There are many facets to the meaning of freedom, but compared to other countries United States is blessed with it, even though the dualism of limitations and freedom will be always present. CITED WORK Einstein, Albert. The world as I see it. New York: Kensington Publishing Corporation, 2006, p. 56. ?? ?? ?? ?? Insignares 1 ...read more.