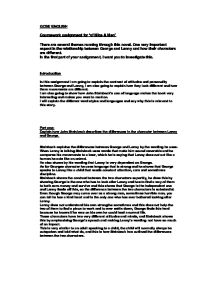 GCSE ENGLISH Coursework assignment for 'of Mice & Men' There are several themes running through this novel. One very important aspect is the relationship between George and Lenny and how their characters are different. In the first part of your assignment, I want you to investigate this. Introduction In this assignment I am going to explain the contrast of attitudes and personality between George and Lenny, I am also going to explain how they look different and how there movements are different. I am also going to show how John Steinbeck's use of language makes the book very interesting and makes you want to read on. I will explain the different word styles and languages and say why this is relevant to this story. Part one: Explain how John Steinbeck describes the differences in the character between Lenny and George. Steinbeck explains the differences between George and Lenny by the wording he uses. When Lenny is talking Steinbeck uses words that make him sound venerable and he compares his movements to a bear, which he is saying that Lenny does not act like a human he acts like an animal. ...read more.

In this quote it uses a simile when it says 'periscope' this is describing the snakes head from a completely different view, it emphasises the language and this makes it more interesting. The words 'side to side' are alliteration. It uses imagery because we can imagine the moves that the snake is making from the strong use of language. 'A motionless heron that stood in the shadows' is also alliteration and by saying a motionless heron this is making the snakes movements sound even more real because nothing else is moving other than the snake. Quote 2: 2. 'the Salinas River drops in close to the hillside bank and runs deep and green'. This quote uses imagery, you can imagine the scene because of the use of strong words like 'deep and green' if it was to say for example: the river was near some hills, this would not create the picture of what the place looked like and would not make the readers interested in reading the book. In 'deep and green' assonance is used as the same vowels (EE) ...read more.

The part of the quote where it says 'drove through the trees like a wave' is a simile because it is comparing the trees movements and how this sounds to a wave crashing against the sand and making a noise. The words 'Silver sides' and 'Few Feet' is alliteration. The part of the quote where it says 'row on row' is repetition. Words like flowed are used to tone down the words like gust and this creates a contrast and between certain parts of the quote as different words are used in different sentences. Conclusion My opinion on the Mice of Men book is that without the superb language used by John Steinbeck it would not be as realistic as it sounds, with the strong use of words in this book you can imagine all these events are happening around you. You can imagine how different the two characters are because Steinbeck has showed the contrast between the two characters so well. This book is so well written and worded that it makes the storyline so much more interesting and exciting. In this assignment I have showed how John Steinbeck uses words to create realisation. I have also showed how he makes the characters profiles sound so different from each other. ...read more.