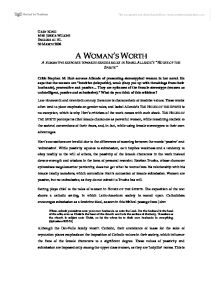 GARY KONG MISS JESSICA WILKINS ENGLISH A1 HL 30 MARCH 2008 A WOMAN'S WORTH A SUMMATIVE RESPONSE TOWARDS GENDER ROLES IN ISABEL ALLENDE'S "HOUSE OF THE SPIRITS" Critic Stephen M. Hart accuses Allende of presenting stereotypical women in her novel. He says that the women are "intuitive (telepathic), weak (they put up with thrashings from their husbands), procreative and passive... They are epitomes of the female stereotype (women as unintelligent, passive and submissive)." What do you think of this criticism? Late nineteenth and twentieth century literature is characteristic of feminist values. These works often tend to place emphasis on gender roles, and Isabel Allende's THE HOUSE OF THE SPIRITS is no exception, which is why Hart's criticism of the work comes with such shock. THE HOUSE OF THE SPIRITS portrays its chief female characters as powerful women, while remaining realistic to the societal conventions of their times, and, in fact, while using female stereotypes to their own advantages. Hart's accusations are invalid due to the differences of meaning between the words 'passive' and 'submissive'. While passivity equates to submission, as it implies weakness and a tendency to obey readily to the will of others, the passivity of the female characters in the work instead denote strength and wisdom in the form of personal restraint. Esteban Trueba, whose character epitomizes megalomaniac patriarchy, does not get what he wants from his relationship with his female family members, which contradicts Hart's accusation of female submission. ...read more.

It is such that Esteban's violent nature does the opposite of what is intended, in that hitting Blanca to control her leads to further rebellion, and hitting Clara to command respect as a husband results in her silence. Physical strength is therefore conveyed by Allende as a form of anti-strength, and Clara's lack of it - expressed by her intuition - represents her individual mental strength. Clara's intuition reflects the strength of passivity. As the spiritual world is completely separate from the physical world in which Esteban has 'control' over her, she uses it to her own advantage. Clara's passivity in her relationship with Esteban is directly attributable to her spiritual tendencies. Her unhealthy marriage - which is largely physical in nature (her belonging to Esteban is expressed through sex) - can easily be escaped by diverting herself to the spiritual, which is not constrained by a patriarchal society. Clara's absent-mindedness and indifference, which is shown in earlier parts of the book when Esteban experiences frustration over their marriage, is due to her spiritual abilities. She is mentally superior to Esteban as she is able to cause frustration on his part, while the opposite does not occur. Here Esteban's frustration over Clara's absent-mindedness is apparent: "The more distant Clara became, the more I needed her love... I wanted to possess her absolutely, down to her last thought, but that diaphanous woman would float by me like a breath of air, and even if I held her down with my hands and embraced her with all my strength, I could never make her mine. ...read more.

It is also why her behavior is much more proactive than Clara and Blanca's more subtle approaches to imposing their will unto others. Like spirituality for Clara, and romantic passion for Blanca, Alba is driven by political pursuits. Alba opposes Esteban Trueba's political doctrine, and harbors refugees in the house without people's consent. Her rebellious nature is contradictory to Hart's accusations of submissiveness. Alba's character is a perfectly suited example of the dual nature of passivity. Alba is an active pursuer of politics, but similar to Clara she still uses silence and passivity to her advantage. During her interrogations concerning Miguel's location, Alba's response of, "I want to go to the bathroom," reflects how she uses feminine stereotypes to her own advantage. (Allende 409) The remark connotes gentleness, and passivity that are considered ideals. She resists the interrogation with the strength associated to men while remaining feminine and womanly. The chief female characters in THE HOUSE OF THE SPIRITS are apt representations of feminine ideals. They remain realistic in their womanly behavior, while displaying the emotional strength and perseverance traditionally associated with men. Although the women in the work sometimes show traces of submission and weakness, the rare appearances of these traits are vastly overshadowed by the general strength displayed by these women. Allende does not paint a black and white picture of gender roles and traits. She is realistic, in that, women, too have vulnerabilities, weaknesses, and lapses of judgment. Ultimately, THE HOUSE OF THE SPIRITS does not typecast women as unintelligent, passive, and submissive. If anything, it is an anthem of how respect and will can be commanded by women even with all odds against them. ...read more.