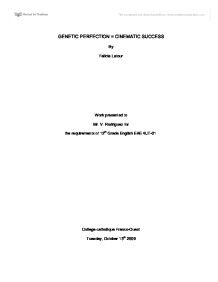 GENETIC PERFECTION = CINEMATIC SUCCESS By Felicia Latour Work presented to Mr. V. Rodriguez for the requirements of 12th Grade English EAE 4UT-01 College catholique Franco-Ouest Tuesday, October 13th 2009 There are very few films in our long and established history of cinema that can claim to have made their audience deeply reflect upon a flawed element of a society that does not yet exist. "Gattaca" is a shining example of a movie's potential to provoke speculation and questioning of something that is simply a prediction of what lies ahead. In truth, the future predicted in Andrew Niccol's1 "Gattaca" is far from definite and after viewing the film, an audience may wish for anything but. In this 19972 sci-fi drama the world has become a sterile and well-defined universe of "Valids" and "in-Valids"; terms given to describe, respectfully, those in possession of genetic perfection and those without. A young and innocent Ethan Hawke portrays the movie's "In-Valid" protagonist who borrows the metaphorical ladder from the "Valid" Jude Law. ...read more.

Alas, only viewing "Gattaca" will provide this much-prized answer The success of the film can be directly attributed to director and screenwriter Niccol for the sheer innovation behind this profound story of human spirit. Many scenes are filled with dazzling art direction and superb dialogue that reflect the film's main theme of "perfection". The hair, the makeup, the clothes, the setting are all too good to be true in their crispness and attention to detail and provide the actors with an exceptional platform on which to stand to deliver their individual roles. Law excels in possibly his most profound role as he delivers the dry, bitter words of a man with tragic circumstances. Law dove in an exemplary manner into the persona of an all-star who had it all going for him yet, depressed, felt no need to live. He outshines lead Hawke who holds his own yet stumbles with his impersonal interpretation of a man that should be passionately fighting for what he believes in. ...read more.

Despite its minor flaws and short-comings, the story and the way it is delivered prove that "Gattaca" remains a relevant film twelve years after its release. One finds it impossible to fathom how someone can walk out of a room after seeing this film without questioning oneself about science's limits and our human tendencies to cross them. If such a world envisioned in "Gattaca" will one day come true, one can only hope that we begin to see that discriminating by genes is no different than the disgraceful racism or sexism or any other type of discrimination that makes up our history. Gattaca, with its superb art direction and convincing actors provide an audience with an opportunity to truly reflect upon our the individuals of our society's flaws and the lack of need to alter them. Before seeing "Gattaca", one could have doubts whether a science-fiction film was going to result in anything but my snoring. But only after seeing "Gattaca" can a person realize how important a film style science-fiction can be in how it can provide an audience a chance to deeply reflect and mitigate one's "near-perfect" surroundings. ...read more.