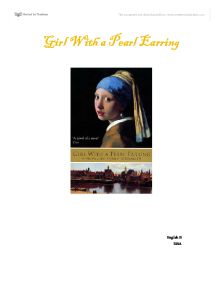 Girl With a Pearl Earring

This shows that she is really starting to slip away from her family and losing respect of them. However, this may not be just because Griet has changed, but also because her parents have changed as well. After a week of hard work at the Vermeer's house, she wants to laugh with them and see them happy. She really cares for her family and does not like to see them suffer. Her father finds the death of his child especially hard and becomes reserved and shy when meeting other people. It looks as if nothing amuses him anymore, except Vermeer's paintings. Every time Griet visits them she explains his painting to her father. This also helps Griet to look at his paintings in another way. She explains to him that when you look at the white cap in his paintings, you realise that it is not white, but blue, violet and yellow (p.96). She has a painters mind set and this is what Johannes realised from their first meeting. However, this confuses her blind father and makes him upset, because he realises how helpless he is when his uneducated daughter understands a painting better than he does. One day Pieter come to see Griet at Vermeer's house and he is very happy to see her. Griet on the other hand, remained calm and did not respond to his feelings. Johannes walked by and saw the smile on Pieters face and stared cold at Griet (p.86). She felt caught between these two men and there is in a way an indirect "fight" for her attention between them. Pieter shows his interest in a very direct way and does all the right things. He spends time with Griet, he visits her parents and gives them presents. However, one of the reasons why Griet holds so much back when it comes to Pieter is that he is too easy to get. ...read more.

She does not want to show Pieter the evidence of Johannes and Griet's relationship and therefore spares him for the pain he may feel. She wants her and Johannes' relationship to maintain secret and spare those around her that she loves. She now felt even with Johannes and felt that she had come free. To conclude, Griet grows up a lot as she is tested in many different relationships. She is forced to mature as she finds characteristics inside of her that she did not know that she had. She knows what she wants for her life and she will not let people treat her as if they were better than her. It is her pride and what she believes in that leads to her finding her place in Vermeers house, but it also helps her to remain herself and to have an opinion of her own. The most important relationship is the one between her and Johannes Vermeer. This relationship develops and changes throughout the book, and it also changes Griet to become who she is ten years later. She finds out who she really is and it is this relationship that helps her to get in touch with her feminine side, also when it comes to Pieter. It was only after she had revealed her hair to Johannes that she opened her door to Pieter and this shows how much influence he had on her life. She also learns to stand up for herself and believe in her values, for example when she did not want to show her hair. He respects her and her decision. By this she learns that everyone should respect her as the human being she is. Ten years later she has become more mature and proud. She is still Griet, but she has other priorities and believes more strongly in her values. She is more confident in herself and she wants respect from the people around her. Griet has grown up and have now become a woman. ...read more.