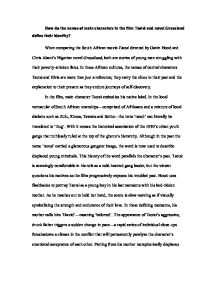 How do the names of main characters in the film Tsotsi and novel Graceland define their identity? When comparing the South African movie Tsotsi directed by Gavin Hood and Chris Abani's Nigerian novel Graceland, both are stories of young men struggling with their poverty-stricken fates. In these African cultures, the names of central characters Tsotsi and Elvis are more than just a reference; they carry the clues to their past and the explanation to their present as they endure journeys of self-discovery. In the film, main character Tsotsi embodies his native label. In the local vernacular of South African townships-comprised of Afrikaans and a mixture of local dialects such as Zulu, Xhosa, Tswana and Sotho-the term 'tsosti' can literally be translated to 'thug'. With it comes the historical association of the 1930's urban youth gangs that ruthlessly ruled at the top of the ghetto's hierarchy. Although in the past the name 'tsotsi' carried a glamorous gangster image, the word is now used to describe displaced young criminals. ...read more.

This act alone foreshadows Elvis's inability to satisfy the conventional role posed upon him in Nigeria's male-dominated society. Beatrice, meaning 'bringer of joy', invests her love and passion for music in Elvis. In the same way music acts as an escape from the slum's grim conditions, Elvis is Beatrice's symbol of hope-an innocent new beginning to life. Both Tsotsi and Elvis define their names through the strong connection with their mothers. When Beatrice dies, Elvis loses his source of inspiration, and the reader questions whether he will still be able to live up to his name. Both Tsotsi and Elvis found motivation and purpose in their mothers' care, thus struggling to maintain "paths of righteousness"(171) after their loss. Although initially thriving in his self-adopted role as criminal, Tsotsi is eventually forced to come to terms with his true, restrained identity. In the beginning, he organizes crime with his followers Boston/Teacher-boy, Butcher and Aap ('monkey' in Afrikaans) at his heels. Together the meanings of the three names describe the characteristics symbolic of a stereotypical street gang; an abandonment of education, a barbaric desire to hurt and kill, and the foolishness of reckless animals. ...read more.

Real make-up, however, is seen as a "dangerous option"(11) because he could be mistaken for a "cross-dressing prostitute"(11). Elvis resorts to layers of "talcum powder" and is "dissatisfied"(11) with his end result. The conservative Nigerian culture denies him freedom in expressing his genuine love for music and dance, and Elvis becomes afraid to define his impersonation as anything other than a materialistic occupation. His mother may have given him a name that carried her artistic inspiration, but she failed to raise him into a life where his true character could flourish without her. It takes Tsotsi years to accept his name, and Elvis a lifetime to try to live up to his. Together, film and novel act as a microcosm for urban African society-a culture in which names are carefully chosen as a representation of character. Hood and Abani use Tsotsi and Elvis to exemplify the powerful role of names in influencing and molding developing characters. Author and director stress the need to take control and establish ourselves in a way that brings honor to our names, and that doesn't allow society's pre-prescribed connotations to define us. Word count: 998 ...read more.