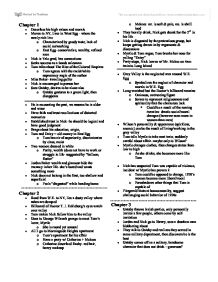 Chapter 1 * Describes his high values and morals * Moves to NY, lives in West Egg - where the newly rich live o Characterized by gaudy taste, lack of social networking o East Egg- conservative, wealthy, refined area * Nick is Yale grad, has connections * Seeks success as a bonds salesman * Tom talks about The Rise of the Colored Empires o Tom agrees with the racist/white supremacy angle of the author * Miss Baker- traveling golfer * Nick is encouraged to pursue her * Sees Gatsby, desires to be alone also o Gatsby gestures to a green light, then disappears * He is recounting the past, we assume he is older and wiser * Have faith and trust recollections of distorted memories * Established trust in Nick- he should be logical and have good judgment * Brags about his education, origin, * Tom and Daisy = old money in East Egg o Tom has air of superiority, discriminates by class, racist * Two women dressed in white o Purity, wealth (does not have to work or struggle in life- suggested by "balloon, flutter" * Jordan Baker wealth and glamour hide the vacancy in her life- she's bored and wants something more * Nick does not belong in the East, too shallow and superficial o Feels "disgusted" while heading home Chapter 2 * Road from W.E. ...read more.

marry Gatsby for his lack of wealth o Seems to ignore Tom's infidelity to protect her social status and wealth * Gatsby now wants to flaunt this wealth in front of Daisy "I want her next door" o Nick is becoming more and more involved with Gatsby's scheme and Jordan's lies o He may have the "good judgment" that he claimed to bear in chapter 1 Chapter 5 * Gatsby and Nick meet on lawn, Gatsby offering money, games, favors in exchange for meeting w/ Daisy o Nick is slightly offended and annoyed * Gatsby is terribly nervous, confesses meeting is a mistake, knocks over Nick's clock * Nick leaves them alone for 30 mins, come back & Gatsby glows whilst Daisy cries tears of happiness * Gatsby invites them over, flaunts his wealth- English shirts * Klipspringer plays "Ain't We Got Fun", Gatsby & Daisy's romance is revived, Nick leaves * Gatsby is terrible nervous, trying to make the meeting perfect by having flowers sent over * Wears gaudy clothes like a true West Egg resident, detracts from his lie of "old money" * Instead the meeting is awkward, he knocks over a clock that stops which suggests that Gatsby has stopped o Chasing after this image and dream of Daisy that only exists in ...read more.

by Jordan o This is a sign of growth in Nick * Wilson is enveloped by grief o States that the purpose of the billboard of Doctor T. J. Eckleburg's eyes, they are the eyes of God that sees everything * Autumn is beginning which also means the beginning of an end- of life too? * Gatsby dies looking up into the sky, staying true to his dreamer image o Doing Daisy one last deed, dying in her place Chapter 9 * Nick plans Gatsby's funeral and has to ensure that people come o He is frustrated that people don't come, except Owl Eyes * Henry C. Gatz (father) arrives o Very proud of his son o Has a pic of his son's house and list of goals/schedule * Nick visits Wolfshiem and confirms that Gatsby did gain his riches from illegal business * Runs into Tom and discovers that he told Wilson where Gatsby lived * Nick returns to the mid-west * Only Nick knew Gatsby as a dreamer, other measured him through his wealth, including his father * Gatsby's schedule explains his beginnings and ambitions * Nick realizes Tom is like a child, and he and his wife only think for themselves * It was the green light that separated Gatsby from his dream ...read more.