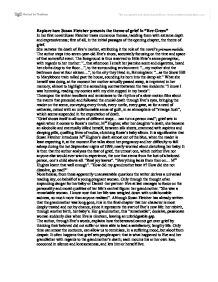 Grief in Eve Green(English A2)

Explore how Susan Fletcher presents the theme of grief in "Eve Green" In her first novel Susan Fletcher treats numerous themes, tackling them with extreme depth and expressiveness; first of all, in the initial passages of the opening chapter, the theme of grief. She narrates the death of Eve's mother, attributing it the role of the novel's primum mobile. The author steps into seven-year-old Eve's shoes, accurately focusing on the time and space of that sorrowful event. The foreground is thus reserved to little Evie's sense perception, with regards to her mother: "...that afternoon I smelt her jasmine scent and cigarettes, heard her cloths drop to the floor...", to the surrounding environment: "...my mother shut the bathroom door at four sixteen...", to the city they lived in, Birmingham: "...as the Snow Hill to Marylebone train rolled past the house, sounding its horn into the damp air." ...read more.

It is significative that Susan Fletcher introduces Mrs Hughes's death almost out of the blue, when the reader is least expecting it, at the moment Eve talks about her pregnancy and her difficulty to fall asleep during the hot September nights of 1999, nearly worried about disturbing her baby. It is then that the author analyses the fear of grief, the utmost one, which neither Eve nor anyone else would ever want to experience, the one that stems from the lost of a beloved person, one's child above all. "Real joy leaves". "Everything lacks from then on... Mrs Hughes learnt that well enough". "How did my grandmother bear it? How did she not dissolve, go mad?" Nonetheless, from these apparently unanswerable questions the writer derives a universal reading key, on behalf of a young pregnant woman. Only through the thought of an impending danger for her baby or Daniel -her partner- Eve at last manages to focus on the personality and moral qualities of her life's central figure: her grandmother. ...read more.

Death, though, can also be softer, people can as well slowly die away like a candle, without suffering too much standing on tiptoes, as happened to seventy-seven-year-old Eve' grandfather, nine years after his wife, while lying up for a bad cold. We could state this event is narrated almost as a minor one; we are presented with such a description by Susan Fletcher, as though the grandfather, a tranquil man, so different from his wife, had chosen to die shyly, discreetly, just as he had lived. The choice of this theme was undoubtedly dictated by the fact that my life too was prematurely marked by a crucial loss -my father's, at the age of seven, like Eve. I know that mood, I perfectly realise how a child of that age is absolutely unable to process so severe a grief, from which he attempts to guard him-herself, sealing his soul, abandoning himself to the evocative power of memory. ...read more.