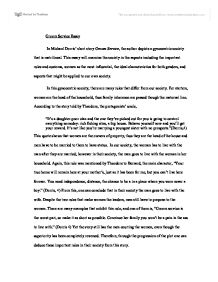 Groom Service Essay In Michael Dorris' short story Groom Service, the author depicts a gynocentric society that is matrilineal. This essay will examine the society in the aspects including the important rules and customs, women as the most influential, the ideal characteristics for both genders, and aspects that might be applied to our own society. In this gynocentric society, there are many rules that differ from our society. For starters, women are the head of the household, thus family inherence are passed though the maternal line. According to the story told by Theodore, the protagonists' uncle, "It's a daughter-poor clan and the one they've picked out for you is going to control everything someday: rich fishing sites, a big house. Behave yourself now and you'll get your reward. It's not like you're marrying a youngest sister with no prospects."(Dorris,4) This quote shows that women are the owners of property, thus they are the head of the house and men have to be married to them to have status. In our society, the woman has to live with the man after they are married; however in their society, the man goes to live with the woman in her household. ...read more.

(Dorris, 3) This statement suggests that Blanche's family is hoping that Marie's potential marriage to Bernard will produce many female offspring that would raise their family's position. Another measure of how much power and influence a woman's family has in the society is natural resources. For example, Blanche's family deals with fishing. A source of her family's influence in their society would be her knowledge and access of good fishing sites. "For another, Blanche's and Bonnie's husbands had begun to join him on his hunts, to show him places to fish that only members of this household knew." (Dorris, 6) Furthermore, it is possible for a male to gain some influence in this society through marriages to powerful women. This is evident when Theodore urges Bernard to go through the ritual of groom service. "It's a daughter-poor clan and the one they've picked out for you is going to control everything someday: rich fishing sites, a big house." (Dorris, 4) This implies that if Bernard is successful with groom service he may gain some influence with a powerful family. The ideal characteristics of women important to the gynocentric society are leadership traits, such as assertiveness, decision-making, and ability to cook. ...read more.

A ritual performed by both sexes to prove their worth, fit as a couple and the ability to provide basic necessities for each other. Perhaps it would lower the number of failed marriages because of the extensive ritual where only strong relationships could pass. In their society, the men would move into the women's household after marriage. In our society, this would be shameful for the man and his family. Our society could take some of the qualities of the society in Groom Service and loosen the pressure of bringing pride to the men's family. Nevertheless, the society in Groom Service is extremely radical and different from our society and not much can be applied. The short story Groom Service is a society where women rule and it is matrilineal. It has many rules and customs including the Groom Service ritual for a marriage proposal and the men moving into the women's household after marriage. In this society the women are the most influential because of their power and influence in a gynocentric society. The ideal characteristics for women are assertiveness, decision-making, and ability to cook while the ideal characteristics for men are obedience, gratitude, and ability to hunt. The aspect of a ritual for courting before marriage might be applied to our society. . ...read more.