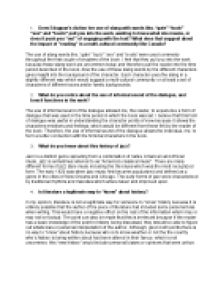 ﻿1. Does Edugyan?s diction her use of slang with words like, ?gate? ?buck? ?axe? and ?boots? pull you into the work, wanting to know what she means, or does it push you ?out? of engaging with the text? What does that suggest about the impact of "reading" in a multi-cultural community like Canada? The use of slang words like, ?gate? ?buck? ?axe? and ?boots? were used commonly throughout the first couple of chapters of the book. I feel that they pull you into the work because these slang word are uncommon today and therefore pull the reader into the time period described in the book. ...read more.

I believe that this form of dialogue was useful in understanding the character points of view because it shows the characters emotions and feelings, which would be different from those felt by the reader of the book. Therefore, the use of informal sound of the dialogue allows the individual, me, to form a better connection with the fictional characters in the book. 1. What do you know about this history of jazz? Jazz is a distinct genre sprouting from a combination of native American and African music, jazz is sometimes referred to as "America's classical music". There are many different forms of jazz style music including the the blues which was the most recognized form. ...read more.

This would have a negative effect on the rest of the information which may or may not be factual. The point can also be made that this is irrelevant because if the reader has a basic knowledge of the point in history being discussed, they should be able to figure out whats bias or personal interpretation of the author. Although, given both points there is no way to ?know? about history because who is to know weather or not the the country who?s history is being written about had been altered in their favour, which is not uncommon, this ?new history? would include personal biases or opinions that were untrue. ...read more.