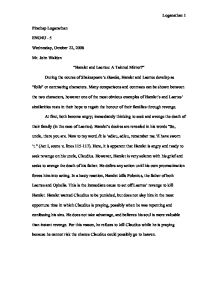 Pirathap Loganathan ENG4U - 5 Wednesday, October 22, 2008 Mr. John Walden "Hamlet and Laertes: A Tainted Mirror?" During the course of Shakespeare's Hamlet, Hamlet and Laertes develop as "foils" or contrasting characters. Many comparisons and contrasts can be shown between the two characters, however one of the most obvious examples of Hamlet's and Laertes' similarities rests in their hope to regain the honour of their families through revenge. At first, both become angry; immediately thinking to seek and avenge the death of their family (in the case of Laertes). Hamlet's desires are revealed in his words "So, uncle, there you are. Now to my word./It is 'adieu, adieu, remember me.'/I have sworn 't." (Act I, scene v, lines 115-117). Here, it is apparent that Hamlet is angry and ready to seek revenge on his uncle, Claudius. ...read more.

He does not take advantage, and believes his soul is more valuable than instant revenge. For this reason, he refuses to kill Claudius while he is praying because he cannot risk the chance Claudius could possibly go to heaven. Similarly, Laertes reveals his anger against Claudius for the death of Polonius, his father. He wants revenge not only for his father, but also for his sister, Ophelia. His response to grief is in direct contrast to the response to grief of Hamlet. Unlike Hamlet, Laertes is prompt to act as he literally mobs the castle upon receiving news of the death of his father, threatening the King while the Queen observes with worry. King Claudius cleverly draws and lures Laertes, eventually influencing him into becoming an ally to kill Hamlet. ...read more.

However, Hamlet chooses to complain. Long stretches of time pass before Hamlet actually decides to take action against Claudius. It seems that his personality (too much thinking) causes him to lose his desire for revenge. On the opposite side, Laertes "literally" mobs the castle over his father's death. He marches right up to Claudius in his anger and threatens to kill him. Hamlet and Laertes represent the two extremes of revenge: procrastination over circumstances, and impulse acting without reasoning. Revenge is the powerful force behind these character's actions, and this led to their ruin. As illustrated, the characters of Hamlet and Laertes are developed as foils through Hamlet. The two characters compare and contrast largely in the area of avengers to seek the vengeance and honour of their families. Truly, Shakespeare's text develops Hamlet and Laertes into tainted mirror images of each other, highlighting Hamlet's personality and actions. Loganathan 1 ...read more.