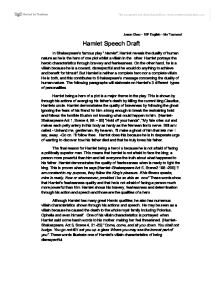 Jason Chau - 10F English - Ms Townend Hamlet Speech Draft In Shakespeare's famous play "Hamlet", Hamlet reveals the duality of human nature as he is the hero of one plot whilst a villain in the other. Hamlet portrays the heroic characteristics through bravery and fearlessness. On the other hand, he is a villain because he is a coward, disrespectful and he would do anything to achieve and benefit for himself. But Hamlet is neither a complete hero nor a complete villain. He is both, and this contributes to Shakespeare's message concerning the duality of human nature. The following paragraphs will elaborate on Hamlet's 3 different types of personalities. Hamlet being a hero of a plot is a major theme in the play. This is shown by through his actions of avenging his father's death by killing the current king Claudius, Hamlets uncle. Hamlet demonstrates the quality of braveness by following the ghost ignoring the fears of his friend for him strong enough to break the restraining hold and follows the horrible illusion not knowing what could happen to him. ...read more.

He may be seen as a villain because he caused the death to the whole royal family including Polonius, Ophelia and even himself. One of his villain characteristics is portrayed when Hamlet said some harsh words to his mother making her feel threatened. [Hamlet-Shakespeare, Act 3, Scene 4, 21-23] "Come, come, and sit you down. You shall not budge. You go not till I set you up a glass Where you may see the inmost part of you". These words illustrate one of Hamlet's villain characteristics of being disrespectful. In addition to that, he broke Ophelia's heart, as well as killing her father which caused her to become insane and lead her to commit suiciding. He also lied to his friends Rosencrantz and Guildenstern changing the letter making them the suspect of execution. Hamlet says [Hamlet-Shakespeare Act 5, Scene 2, 61-66] "Why, man, they did make love to this employment. They are not near my conscience. ...read more.

But I have that within which passes show these but the trappings and the suits of woe." This makes the reader feel that he dislikes his mother but on the contrary he still loves her even though she has left him in a miserable situation. These examples portray the duality of human nature from the character Hamlet. Hamlet can be both the hero due to the bravery and fearlessness he has shown through his actions. Although he shows heroic qualities, he can still be a villain through his coward, disrespectful and immoral actions. Hamlet is often noticed that he has more than one side to his personality at the same time and this is revealed through the play when he stands for what he believes in and takes avenge for his father's death but in the contrary not only did he kill Claudius, he was involved in everyone's death including Ophelia, Polonius, Gertrude, Laertes, Rosencrantz and Guildenstern and that he would do anything to achieve and benefit for himself. Through these actions, Hamlet portrays the qualities of the duality of human nature. ...read more.