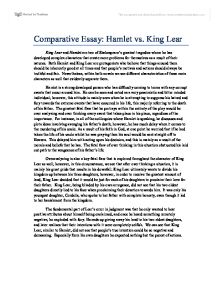 Comparative Essay: Hamlet vs. King Lear King Lear and Hamlet are two of Shakespeare's greatest tragedies where he has developed complex characters that create more problems for themselves as a result of their natures. Both Hamlet and King Lear are protagonists who believe that things around them should be inherently good at all times and that people's motives and actions should always be truthful and fair. Nevertheless, within both novels we see different characteristics of these main characters as well that evidently separate them. Hamlet is a strong developed person who has difficulty coming to terms with any corrupt events that occur around him. He can be seen and noted as a very pessimistic and bitter minded individual; however, this attitude is mainly seen when he is attempting to suppress his hatred and fury towards the extreme events that have occurred in his life, this majorly referring to the death of his father. ...read more.

King Lear ultimately wants to divide his kingdom up between his three daughters; however, in order to receive the greatest amount of land, King Lear decided that it would be just for each of his daughters to proclaim their love for their father. King Lear, being blinded by his own arrogance, did not see that his two oldest daughters directly lied to his face when proclaiming their devotion towards him. It was only his youngest daughter, Cordelia, who spoke to her father with complete honesty, even though it led to her banishment from the kingdom. The fundamental part of Lear's error in judgment was that he only wanted to hear positive attributes about himself being exclaimed, and once he heard something remotely negative, he exploded with fury. He ends up giving away his land to his two eldest daughters, and later realizes that their intentions with it were completely selfish. ...read more.

With Hamlet, however, we see that the death of his father is one of the contributory factors that lead to the tragedies that followed along. Hamlet's inherent tendency to overanalyze all situations that he is presented with is the biggest cause of his isolation and his removal from all reality by the end of the play. As a result of this, we see that Hamlet's fatal flaw begins as something internal and carries out all throughout the play remaining untouched. Both characters, Hamlet and King Lear, possess characteristics and personality traits that lead them to their isolation and fear. Shakespeare brilliantly showed us that even a single fatal flaw within a character has the potential to ultimately lead them to extreme failure, and we see this characteristic especially within these two protagonists. Both of them started off inherently good, however, as a result of their failure to notice people's ungrateful and selfish characteristics, they ended up with nothing. ...read more.