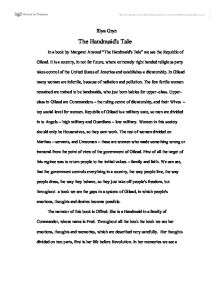 Illya Gryn The Handmaid's Tale In a book by Margaret Atwood "The Handmaid's Tale" we see the Republic of Gilead. It is a country, in not far future, where extremely right handed religious party takes control of the United States of America and establishes a dictatorship. In Gilead many woman are infertile, because of radiation and pollution. The few fertile women remained are trained to be handmaids, who just born babies for upper-class. Upper-class in Gilead are Commanders - the ruling centre of dictatorship, and their Wives - top social level for women. Republic of Gilead is a military state, so men are divided in to Angels - high military and Guardians - low military. Women in this society should only be Housewives, so they cant work. The rest of women divided on Marthas - servants, and Unwomen - these are women who made something wrong or immoral from the point of view of the government of Gilead. First of all the target of this regime was to return people to the initial values - family and faith. We can see, that the government controls everything in a country, the way people live, the way people dress, the way they behave, so they just ...read more.

It again proves that not everything in Gilead is so controlled, it makes her start to believe in a chance to escape. The second reason that makes her think one more time about reality of this society is when Nick tells Offred that Commander wants to see her next night see wants her to come to his office. She was shocked again, because she doesn't really know what does Commander want to do with her. Also we can see that she was scary and angry at the same time, because the only thing the Commander can want from her is her body: "Hasn't he had enough of me"(p. 110) - it talks about Ceremony. Next night she comes to Commander's office as he wished her to do. It is a big surprise for Offred when instead of some kind of soliciting, he just wants to play Scrabbles with her. But the most interesting happens when Offred is leaving his room and Commander asks to kiss him like as she really wants to do this. But she does it cold and with out feelings and this makes the Commander sad. ...read more.

During the nights they spend together commander shows her magazines that he has from the past, finds hand lotion for her and then invites her to the "club". Analysing this, he becomes the most cruel breaker of the rules of Gilead. It proves that his society is very corrupted and if you have a high position you can obtain everything. The situation with the Commander and Offred shows us that people in that cold and unemotional society really need warmth, communication and tenderness. It again proves us that doesn't depend what social status you have, you need some freedom, the Commander shows this in relationships with Offred, all the time he tries to prove that this society is not so "dead". Atwood shows us the totalitarian world, where women have no rights and men have everything. Throughout all the book we have some kind of rebelling. It shows us that people of that society have hope of freedom and they fight for it. Even people with high status in Gilead can go again the law to achieve their desires. To conclude, doesn't matter how powerful the government is, if people have their desires and thoughts, no one can stop them on the way of their realization. ...read more.