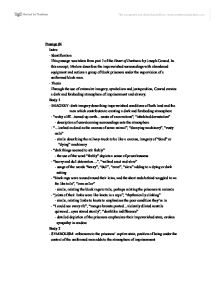 Passage #4 Intro - Identification: This passage was taken from part 1 of the Heart of Darkness by Joseph Conrad. In this excerpt, Marlow describes the impoverished surroundings with abandoned equipment and notices a group of black prisoners under the supervision of a uniformed black man. - Thesis Through the use of extensive imagery, symbolism and juxtaposition, Conrad creates a dark and foreboding atmosphere of imprisonment and slavery. Body 1 - IMAGERY: dark imagery describing impoverished conditions of both land and the men which contributes to creating a dark and foreboding atmosphere - "rocky cliff...turned-up earth...waste of excavations", "inhabited devastation" - description of unwelcoming surroundings sets the atmosphere - "...looked as dead as the carcass of some animal", "decaying machinery", "rusty nails" - ...read more.

- simile, relating the black rags to tails, perhaps relating the prisoners to animals - "joints of their limbs were like knots in a rope", "rhythmically clinking" - simile, relating limbs to knots to emphasizes the poor condition they're in - "I could see every rib", "meagre breasts panted...violently dilated nostrils quivered...eyes stared stonily", "deathlike indifference" - detailed depiction of the prisoners emphasizes their impoverished state, evokes sympathy in readers Body 2 - SYMBOLISM: references to the prisoners' captive state, position of being under the control of the uniformed man adds to the atmosphere of imprisonment - "decaying machinery, a stack of rusty nails" - symbolises the poor condition in which the prisoners are in - "moved about like ants" - relating the people ...read more.

white, rascally grin" - contrast in the quality of their attire, their mood - the prisoners have a deathlike indifference, implying that they've given up or lost hope while the guard grins - the prisoners are passive, moving in the same manner ("the clink kept time with their footsteps") while the guard is more active with unplanned movements ("hoisted his weapon to his shoulder with alacrity...speedily reassured...glance at his charge...seemed to take me into partnership in his exalted trust") Conclusion - In this passage, the detailed imagery of the dying surroundings and the impoverished men, symbolism of the prisoners' powerlessness and the juxtaposition between the guard and the men effectively contributes to present a gloomy atmosphere to the readers and evokes sympathy from them. ...read more.