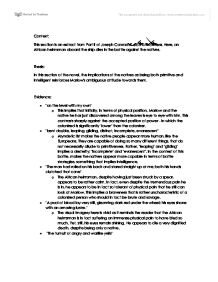 Context: This section is an extract from Part II of Joseph Conrad's Heart of Darkness. Here, an African helmsman aboard the ship dies in the battle against the natives. Thesis: In this section of the novel, the implications of the natives as being both primitive and intelligent reinforces Marlow's ambiguous attitude towards them. Evidence: * "on the level with my own" o This implies that initially, in terms of physical position, Marlow and the native he has just discovered among the leaves is eye to eye with him. This contrasts sharply against the accepted position of power - in which the colonized is significantly "lower" than the colonizer. ...read more.

This implies a braveness that is rather uncharacteristic of a colonized person who should in fact be brute and savage. * "A pool of blood lay very still, gleaming dark-red under the wheel; his eyes shone with an amazing lustre." o The visual imagery here is vivid as it reminds the reader that the African helmsman is in fact suffering an immense physical pain to have bled so much. Yet, still, his eyes remain shining. He appears to die a very dignified death, despite being only a native. * "The tumult of angry and warlike yells" o However, again, the natives are again depicted as savage and uncivilized as they scream in such a manner, evoking the reader to perceive them as rather animalistic. ...read more.

* "it looked as though he would presently put to us some question in an understandable language; but he died without uttering a sound, without moving a limb, without twitching a muscle." o This sentence alone showcases two contrasting views of the natives. Firstly, it seems to divulge an understanding of the dying African helmsman on Marlow's part and implies Marlow's anticipation of the African helmsman to communicate his last words to Marlow. However, the helmsman does not speak, reverting to being a native with whom Marlow cannot communicate. Conclusion: Marlow's observations regarding the natives and the African helmsman are, as presented in this passage, contradicting in many cases. His observations are objective; he notes civilized as well as uncivilized characteristics in the natives and the African helmsman that both comply and disagree with the sweeping generalizations prevalent among Europeans of the natives. ...read more.