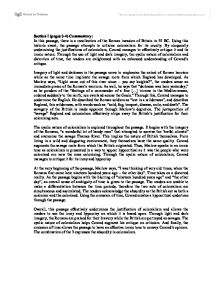 Section I (pages 3-4) Commentary: In this passage, there is a recollection of the Roman invasion of Britain in 55 BC. Using this historic event, the passage attempts to criticize colonialism for its cruelty. By eloquently undermining the justifications of colonialism, Conrad manages to effectively critique it and its ironic nature. Through the use of light and dark imagery, the cyclic nature of colonialism and distortion of time, the readers are enlightened with an enhanced understanding of Conrad's critique. Imagery of light and darkness in the passage serve to emphasize the extent of Roman heroism while as the same time implicate the savage roots from which England has developed. ...read more.

The savagery of the British is made apparent through Marlow's depiction. The juxtaposition of "savage" England and colonialism effectively strips away the British's justification for their colonizing acts. The cyclic nature of colonialism is explored throughout the passage. It begins with the imagery of the Romans, "a wonderful lot of handy men" that attempted to survive the "awful climate" and overcome the savage Thames River. This implies the nature of British themselves. From living in a wild and disgusting environment, they themselves have the same quality. Conrad augments the savage roots form which the British originated. Thus, Marlow speaks in an ironic tone as colonialism is presented in a way to appear hypocritical as it was the people who were colonized are now the ones colonizing. ...read more.

The readers are unable to make a differentiation between the time periods; therefore the two acts of colonialism are simultaneous and assimilated. The readers acknowledge the absurdity as the British act as both a colonizer and the colonized. Using the omission of time, Conrad creates a hypocritical undertone through the passage. Overall, this passage effectively undermines the justification of colonialism and allows the readers to see the irony and hypocrisy on which it is based upon. Through light and dark imagery, the Romans are praised for their bravery while the British are portrayed as savages. The cyclic nature of colonialism helps Conrad augment his critique on criticism. And finally, the omission of time allows the passage to have an effective ironic tone to convey Conrad's opinion. The combination of the 3 expresses the absurdity in colonialism. ...read more.