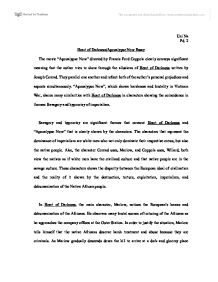 In order to justify the situation, Marlow tells himself that the native Africans deserve harsh treatment and abuse because they are criminals. As Marlow gradually descends down the hill to arrive at a dark and gloomy place where he calls it the "Grove of Death", he sees many Africans suffering from pain and dying by starvation. After Marlow quickly moves away from this terrible place, he reaches the main building where he meets the Accountant who is well dressed in nicely ironed and clean outfit, a complete contrast to the Africans suffering and dying outside. The Accountant gets irritated by the moaning of the Africans and calls them savages with contempt and hatred. ...read more.