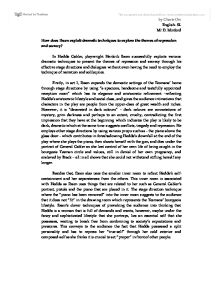 by Charis Ow English- SL Mr D. Minford How does Ibsen exploit dramatic techniques to explore the themes of repression and secrecy? In Hedda Gabler, playwright Henkrik Ibsen successfully exploits various dramatic techniques to present the themes of repression and secrecy through his effective stage directions and dialogues without even having the need to employ the technique of narration and soliloquies. Firstly, in act 1, Ibsen expands the domestic settings of the Tesmans' home through stage directions by using "a spacious, handsome and tastefully appointed reception room" which has its elegance and aristocratic refinement -reflecting Hedda's aristocratic lifestyle and social class, and gives the audience intimations that characters in the play are people from the upper-class of great wealth and riches. However, it is "decorated in dark colours" - dark colours are connotations of mystery, grim darkness and perhaps to an extent, cruelty, contradicting the first impression that they have at the beginning which indicates the play is likely to be dark, dramatic which at the same time suggests conflicts, tragedy and repression. He employs other stage directions by using various props such as - the piano above the glass door - which contributes in foreshadowing Hedda's downfall at the end of the play where she plays the piano, then shoots herself with the gun, and dies under the portrait ...read more.

The fact that she despises the light and instructs her husband to "draw the curtains" perhaps indicates that Hedda has desires not to be clear and transparent to the world and that she wants to keep things hidden and veiled - which applies to the fact that she denies, resents and represses her pregnancy and the prospect of motherhood, meanwhile also refuses to be bound to the expectations of society. Moreover, in the scene where she said to Thea, "what do you think people will say about you, Thea?" indicates her being an immensely repressed individual as she is apprehensive of what the society thinks of her, which then contradicts her goal of breaking free from being compliant to society's expectations. In addition to that, the costumes of each character also carry a significant meaning which Ibsen effectively exploits throughout the play. In the beginning of act I, where Tesman and his Aunt Julle are carrying out a regular conversation with each other, Tesman commented that her hat is "fine and fancy" as he turns it around his hand. "I bought it because of Hedda" - she explains, and adds on "so Hedda won't be ashamed of me, if we should happen to walk together in the street" - referring to Ibsen's portrayal of Aunt Julle; a bourgeoisie character who is ...read more.

His entrance is symbolic as it exhibits his character that possesses a dark personality, perhaps full of mystery as well as dark secrets. The similar incident happens in Act III with the only difference that this time; Brack is moving out from the house "towards the glass door" and leaves "through the garden", "round the back way" - refers not only to his using the back entrance to the house, but to his being sneaky, secretive and devious. He also thinks that "at times it can be quite stimulating" which implies his scheming personality, as he finds dark secrets and secret affairs amusing. Ibsen explicitly exposes stresses of modern life by setting up this play with themes such as repression and secrecy to show his audience the inner strains and conflicts that inhibit the individual during the fastidious Victorian society. He also shows the pressures, insured expectations and values of society which suppresses individuality - leaving people such as Hedda as an example, feeling repressed and constrained. In addition to that, Ibsen's goal of intriguing the play's storyline is also, at the same time, to enunciate the hunger for freedom from the enclosed social barriers, blemishes and downfall of men and women in Victorian society. (1282 words) ?? ?? ?? ?? ...read more.