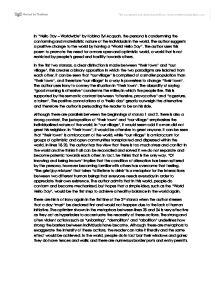 In "Hello Day - Worldwide" by Kobina Eyi Acquah, the persona is condemning the conforming and materialistic nature of the individuals in the world. The author suggests a positive change to the world by having a "World Hello Day". The author uses this poem to promote the need for a more open and optimistic world, a world that is not restricted by people's greed and hostility towards others. In the first two stanzas, a clear distinction is made between "their town" and "our village". This creates a binary opposition in which the two paradigms are isolated from each other. It can be seen that "our village" is comprised of a smaller population than "their town", and therefore "our village" in a way is powerless to change "their town". The author uses irony to convey the situation in "their town". The absurdity of saying "good morning is offensive" condemns the milieu in which the people live. This is supported by the semantic contrast between "offensive, provocative" and "a gesture, a token". The positive connotations of a "hello day" greatly outweigh the alternative and therefore the author is persuading the reader to be on his side. ...read more.

Although these are metaphors to exaggerate the intensity of these actions, the reader can take it literally and the same effect would be achieved. In the world, people do in fact bar their windows and gates; they do have fences and walls; and there are numerous border ports and entry permits. From the listing of these actions, it can be seen that the author encourages assimilation and interconnection of societies. The idea of superficiality is also examined in the third and fourth stanzas. The authors is unsure about what the people are really wanting, highlighting the ambiguous and capricious nature of human beings. The author believes that when people say hello, they are only doing it to form an image that they can be "contrapt" within. This made up word has connotations of recoil and reluctance, which shows human beings have no intention of exchanging greetings and are only doing so for the sake of doing it. This is followed with the simile: "like a toothpaste smile". Toothpaste is soft and shapeless, and therefore a toothpaste smile can be seen as a smile forced. This smile is only temporary and cannot be maintained due to the lack of feeling behind it. ...read more.

The last stanza is composed of only 2 lines. This is an anti-climax to show how hard it is for everything to be changed and how little hope there is. "We", a small group of people, "follow in their train". Slowly and gradually "we" are becoming more like "them", more conforming and isolated and mechanized. The poem ends with a feeling of hopelessness, and the readers realize how vast the world is and also how difficult it is to change. There are a lot of patterns in the sounds of the poem. Many of the consecutive lines start with the same letter or world such as: "a hello day, a gesture, a token" and "and did not greet/and ask how he is/ and how is home." This regular pattern may portray the uniformity of the people in the world. It also condemns the banal and vapid nature of the people, attacking their unoriginality and pedestrian lifestyles. Through this poem, the author has successfully conveyed his messages to the reader. Not only does he dislike the conforming and emotionless system we live in, he also repudiates the thought of being dragged into this system. His means of consolation is to devise this "World Hello Day", in hopes of having some optimistic individuals remaining behind and not following the "train" to eternal greed and alienation. ...read more.