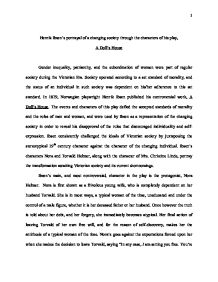 Henrik Ibsen(TM)s portrayal of a changing society through the characters of his play, A Doll(TM)s House

Henrik Ibsen's portrayal of a changing society through the characters of his play, A Doll's House Gender inequality, patriarchy, and the subordination of women were part of regular society during the Victorian Era. Society operated according to a set standard of morality, and the status of an individual in such society was dependent on his/her adherence to this set standard. In 1879, Norwegian playwright Henrik Ibsen published his controversial work, A Doll's House. The events and characters of this play defied the accepted standards of morality and the roles of men and women, and were used by Ibsen as a representation of the changing society in order to reveal his disapproval of the rules that discouraged individuality and self-expression. Ibsen consistently challenged the ideals of Victorian society by juxtaposing the stereotypical 19th century character against the character of the changing individual. Ibsen's characters Nora and Torvald Helmer, along with the character of Mrs. ...read more.

She visits Nora to ask that Torvald find her a job at the bank, and when Torvald meets her and learns of this, he immediately asks, "I presume you are a widow, Mrs. Linde?" (36). This almost automatic reaction shows that since Mrs. Linde is a widow, the rules of society no longer apply to her, as it is acceptable for her to work. In this way, Mrs. Linde represents what society will transform into. Ibsen also seems to suggest the direction in which he desires society to head, by creating the romantic plot between Mrs. Linde and Krogstad. "Nils, I have faith in the real you - I can face anything with you" (91). The relationship between Christine Linde and Nils Krogstad contrast that between Nora and Torvald Helmer in that the former is based on love, not on the expectations of society or the natural order of events, whereas the latter is based on a need to conform and fit into the roles assigned. ...read more.

Ibsen juxtaposes Torvald's Victorian character against Nora and Ms. Linde's characters, with one acting as criticism of current society, and the others acting as its needed change. Henrik Ibsen created a new kind of character in A Doll's House, one that did not conform to the ideals of Victorian society, and introduced a potential new way of thought to conventional audiences. His personal distaste for the lack of individuality and inequality between genders is conveyed through the play's characters, who were developed in such a way that audiences could not judge immediately based on romanticized understandings of right and wrong. While Nora's act of leaving her marriage would be considered scandalous, her argument that it is unreasonable that the actions she committed in trying to keep her husband alive constituted a felony provokes thought. Ibsen manipulates the audience's emotions in a manner completely opposite to theater of the time, in which there was always a moral that agreed with society's standards. ...read more.