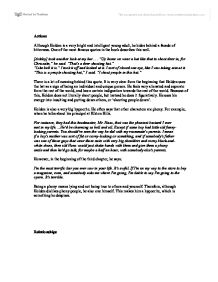 Actions Although Holden is a very bright and intelligent young adult, he hides behind a facade of bitterness. One of the most famous quotes in the book describes this well. [Ackley] took another look at my hat . . . "Up home we wear a hat like that to shoot deer in, for Chrissake," he said. "That's a deer shooting hat." "Like hell it is." I took it off and looked at it. I sort of closed one eye, like I was taking aim at it. "This is a people shooting hat," I said. "I shoot people in this hat." There is a lot of meaning behind this quote. It is very clear from the beginning that Holden uses the hat as a sign of being an individual and unique person. He feels very alienated and separate from the rest of the world, and has a certain indignation towards the rest of the world. Because of this, Holden does not literally shoot people, but instead he does it figuratively. He uses his energy into insulting and putting down others, or 'shooting people down'. Holden is also a very big hypocrite. He often says that other characters are phony. For example, when he talks about his principal at Elkton Hills. For instance, they had this headmaster, Mr. Haas, that was the phoniest bastard I ever met in my life. ...He'd be charming as hell and all. Except if some boy had little old funny-looking parents. ...read more.

I couldn't stand it. Since Holden is actually an intelligent and mature boy, he finds that the world is much more complex than many understand. The world is not just black and white, but instead in shades of gray. He has many strong opinions on the world, yet he is sometimes afraid to express it. He builds an armor around himself - a pessimistic, cynical view of the world - so as to protect himself from the rest of the world. He is a very complex, deep character that has many layers. Thought It can be seen that Holden doesn't enjoy reality. To escape reality, he constantly tries to avoid it, such as planning escapes with Sally. We'll stay in these cabin camps and stuff like that till the dough runs out. Then, when the dough runs out, I could get a job somewhere and we could live somewhere with a brook and all and, later on, we could get married or something. I could chop all our own wood in the wintertime and all. There was also another 'escape' that he planned, of pretending he was a deaf-mute and moving to some place where nobody knew him. I thought what I'd do was, I'd pretend I was one of those deaf-mutes. ...We could buy them a lot of books and teach them how to read and write by ourselves. Holden constantly resists entering the 'adult world', but doesn't have much choice as it is a natural thing to grow older. ...read more.

But if you get on the other side, where there aren't any hot-shots, then what's a game about it? Nothing. No game. This quote tells us a lot about Holden's character. From this we can see that although he is nodding on the outside, he is outright disagreeing in the inside. This not only makes him a phony, but shows Holden's dislike of adults and the adult world. It is clear that Holden feels he is not part of the side that is winning. Instead, he feels that he is being victimized and that the world has turned its back against him. . . . I'm standing on the edge of some crazy cliff. What I have to do, I have to catch everybody if they start to go over the cliff-I mean if they're running and they don't look where they're going I have to come out from somewhere and catch them. That's all I'd do all day. I'd just be the catcher in the rye and all. As we can tell already, Holden enjoys escaping reality, and instead slipping into fantasy. He has a view that children are all innocent and pure, while adults are hypocrites. Holden himself knows that that idea is crazy, however, he has trouble seeing the world in any other way. Holden's fantasy consists of a world of innocence and purity. He longs to protect this innocence, purity and unharmed youth and shield it from the harshness of reality. Holden's view of the world is distorted and naive, and shows just how detached he feels from the world. ...read more.