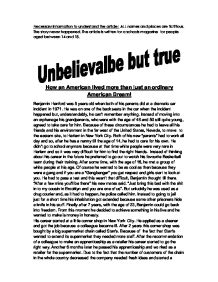 How an American lived more than just an ordinary American Dream! Written Task English A2

Necessary information to understand the article: ALL names and places are fictitious. The story never happened. The article is written for a schools magazine for people aged between 14 and 18. How an American lived more than just an ordinary American Dream! Benjamin Hanford was 5 years old when both of his parents did at a dramatic car incident in 1971. He was on one of the back seats in the car when the incident happened but, understandably, he can't remember anything. Instead of moving into an orphanage his grandparents, who were with the age of 48 and 50 still quite young, agreed to take care for him. Because of these circumstances he had to leave all his friends and his environment in the far west of the United States, Nevada, to move to the eastern site, to Harlem in New York City. ...read more.

After some time, with the age of 16, he met a group of white people at his age. Of course he wanted to be as cool as then because they were a gang and if you are a "Gangbanger" you get respect and girls start to look at you. He had to pass a test and this wasn't that difficult, Benjamin thought till there. "After a few mins you'll be there" his new mates said. "Just bring this bad with the shit in to my cousin in Brooklyn and you are one of us". But unluckily he was used as a drug courier and, as it had to happen, he police called him. Instead to going to jail just for a short time his inhabitation got extended because some other prisoners hide a knife in his stuff. ...read more.

Because of the fact that Stan's wanted to extend its supermarket they needed more staff. After the recommendation of a colleague to make an apprenticeship as a retailer his career started to go the right way. Another 6 months later he passed his apprenticeship and worked as a retailer for the supermarket. Due to the fact that the number of customers of the chain in the whole country decreased the company needed fresh ideas and started a campaign to encourage their employees to develop fresh marketing ideas and campaigns. Every employee could develop a marketing strategy to send it to the executive board. The winner will get a reward and the chance to jump a few steps on the career ladder. Although this work was voluntarily and the participators will not get paid Benjamin spend his whole weekend thinking about "a new and fresher Stan's", how he told us. ?? ?? ?? ?? ...read more.