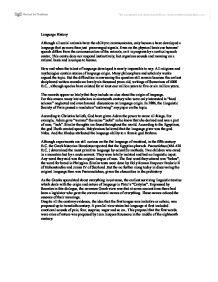 How and when the talent of language developed is nearly impossible to say. All religions and mythologies contain stories of language origin. Many philosophers and scholarly works argued the topic.

Language History Although all social animals have the ability to communicates, only human s have developed a language that ss more than just prearranged signals. Even on tha physical basis our humans' speech differs from the communication of the animals, as it is progress by a cortical speech center. This centre does nor respond instinctively, but organizes sounds and meaning on a rational basis and is unique to human. How and when the talent of language developed is nearly impossible to say. All religions and mythologies contain stories of language origin. Many philosophers and scholarly works argued the topic. ...read more.

In 1886, the Linguistic Society of Paris passed a resolution "outlawing" any paper on the topic. According to Christian beliefs, God have given Adam the power to name all things. For example, Adam gave "woman" the name "ischa" as he knew that she derived and was a part of man, "isch". Similar thoughts are found throughout the world. According to the Egyptians, the god Thoth created speech. Babylonians believed that the language giver was the god Nabu. And the Hindus attributed the language ability to a female god Brahma. Although experiments are still curious on the fist language of mankind, in the fifth century B.C. ...read more.

As the Greeks speculated about everything in universe, the earliest surviving linguistic treatise which deals with the origin and nature of language is Plato's "Cratylus". Expressed by Socrates in this dialogue, the common Greek view was that at some ancient time there had been a legislator who gave the correct natural names of everything. These names echoed the essence of their meanings. Despite all the contrary evidence, the idea that the first tongue was imitative or echoic, was proposed up to twentieth century. A parallel view states hat language at first included emotional sounds of pain, fear, surprise, anger and so on.. This proposal that the first words were cries of nature was proposed by Jean Jacques Rousseau in the middle of the eighteenth century. ...read more.