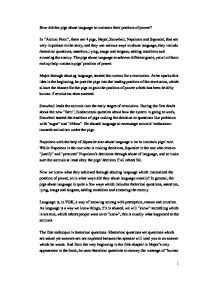 How did the pigs abuse language to maintain their position of power in Animal Farm?

How did the pigs abuse language to maintain their position of power? In "Animal Farm", there are 4 pigs, Major, Snowball, Napoleon and Squealer, that are very important to the story, and they use various ways to abuse language, they include rhetorical questions, assertion, lying, songs and slogans, adding condition and smearing the enemy. The pigs abuse language to achieve different goals, yet all of them end up help maintain pigs' position of power. Major through abusing language, started the motion for a revolution. As he sparks this idea in the beginning, he puts the pigs into the leading position of the revolution, which allows the chance for the pigs to gain the position of power which has been held by human if revolution does succeed. Snowball leads the animals into the early stages of revolution. During the first doubt about the new "farm", fundamental question about how the system is going to work, Snowball started the tradition of pigs making the decision to questions like problems with "sugar" and "ribbon". He abused language to encourage animals' enthusiasm towards animalism under the pigs. Napoleon with the help of Squealer also abuse language a lot to maintain pigs' rule. While Napoleon is the one who is making decisions, Squealer is the one who tries to "justify" and "promote" Napoleon's decisions through abuse of language, and to make sure the animals at least obey the pigs' decision if all others fail. ...read more.

Therefore, later in the story, Squealer tries to use the same technique, yet because his lack of credibility he needed assistance from other techniques. Assertion is also used by Major, assertion is like taking rhetorical questions to a higher level, directly telling others about your idea, in a bold statement which shall only be used with undisputable truth. It takes away the possibility of discussion as the subjects of assertion are often arguable perspective and directly jumps to a conclusion, which means truth is established perhaps solely based words (language) of one or a few. That includes "No animal escapes the cruel knife in the end." This also reinforces Major ethical claim for overthrowing. Yet it also has the same weakness as rhetorical questions. Assertion sometimes comes with lying, as sometimes assertion will not be too effective and lasting if there is not justification, so when there is not much justification, the pigs lie, make up something to "justify". This is most professed by Squealer as he was not treated as an authority by the pets hence needs to lie. He uses "Milk and apples (this has been proved by Science, comrades) contain substances absolutely necessary to the well-being of a pig." Squealer in this case lies to create a "science", a scientific knowledge which provides rationale for the pigs to take away the milk and apples. ...read more.

Lastly, from Major to Squealer, all the pigs smear about "enemies" yet they also decide who belongs to "enemies" and who does not. In chapter 1, Major smears humans for their cruelty against animals to spark hatred against humans, such as "Man is the only real enemy we have. Remove Man from the scene, and the root cause of hunger and overwork is abolished for ever.", this helps gain support for his idea for revolution. "Every night, it was said, he came creeping in under cover of darkness and performed all kinds of mischief. He stole the corn, he upset the milk-pails, he broke the eggs, he trampled the seedbeds, he gnawed the bark off the fruit trees." This was said so the pigs can blame all failures on someone who cannot defend himself. Squealer also smears humans for their cruelty again yet this time it is to provoke terror in order to somehow warn the animals if the pigs are gone, the worse will come to make sure they do not revolt again. Language was abused by the pigs to create motion for revolution under the pigs, justification for pigs' unreasonable actions, enthusiasm towards animalism under the pigs, obedience to pigs' order when enthusiasm is lost. In conclusion, no matter how the pigs abuse language, they abuse it to maintain their position of power. ...read more.