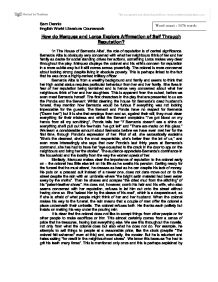 How do Marquez and Lorca Explore Affirmation of Self Through Reputation?

How do Marquez and Lorca Explore Affirmation of Self Through Reputation? 'In The House of Bernarda Alba', the role of reputation is of central significance. Bernarda Alba is obviously very concerned with what her neighbours think of her and her family as desire for social standing drives her actions, something Lorca makes very clear throughout the play. M�rquez displays the colonel and his wife's concern for reputation in a more subtle way but it still comes across powerfully. The colonel is more concerned about looking strong despite living in absolute poverty. This is perhaps linked to the fact that he was once a highly-ranked military officer. Bernarda Alba is from a wealthy background and family and seems to think that her high social status requires particular behaviour from her and her family. She lives in fear of her reputation being tarnished and is hence very concerned about what her neighbours think of her and her daughters. This is apparent from the outset, before we even meet Bernarda herself. The first characters in the play that are presented to us are the Poncia and the Servant. Whilst cleaning the house for Bernarda's dead husband's funeral, they mention how Bernarda would be furious if everything was not looking impeccable for the guests. The Servant and Poncia have no respect for Bernarda ("Damn her!") but it is she that employs them and so, against their will, they must clean everything for their mistress and whilst the Servant complains "I've got blood ...read more.

This almost certainly comes from a sense of pride that he treasures, having lost everything else. We see this throughout the novella, not only from what the colonel does but also what he does not do. For example, he attempts to sell things to people at a reasonable price, like the clock (despite "The colonel felt ashamed" even at this) and, eventually, the rooster. But he is reluctant and hates asking "for credit in the neighbourhood stores". We know this because "he had to grit his teeth many times". This is mentioned only once and this is perhaps explained by the fact that the colonel is ashamed of this and although the novella is written as a third person narrative, events are explored from the colonel's perspective. The fact that M�rquez only mentions this incident once and quickly shows that it is something that the colonel would rather hide and let pass. There is another moment in the text where he is at Sabas' house and he declines another umbrella and says that he would rather wait for the storm to pass. Although the colonel and his wife are in desperate need of money and the colonel's pension, they would hate to show that they are suffering. They want to appear strong more than anything and want to keep up their image and hence, their reputation. As well as there being a definite desire for reputation amongst the eponymous protagonists in the two texts; there is a similar feeling amongst many other characters. ...read more.

Marquez uses the Colonel to tell the tale of a time of deep injustice for both civilians and war veterans in Colombia. Reputation is hence a key theme because when everything has been taken away by their government, all they have left is image and reputation to survive with. Conversely, this is something that the government has lost amongst the people. In conclusion, I believe that the themes of reputation and image play a key role in both The House of Bernarda Alba and No One Writes to the Colonel and that they, in a certain way, dictate the ways in which the main characters act throughout their respective texts. What is very interesting to notice is the difference in the reputations that Bernarda and the Colonel are attempting to live up to whilst taking into account their situation. Whilst Bernarda has money but maintains her power in her household in a most brutal way and a great lack in faith and friends, she is worried about seeming very religiously correct, to the point that she exaggerates this greatly (she decided on eight years of mourning for her and her family). The colonel, on the other hand, is a good man but has no money. Therefore, his concern is about seeming strong despite this and he realises that he has friends and that people like him so he has no fears about being a good citizen and friend. Both writers show us that how we are perceived by others affects our sense of identity and, in turn, our status in society. ...read more.