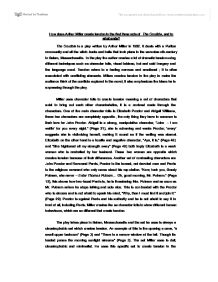 How does Arthur Millar create tension in the first three acts of The Crucible, and to what ends?

How does Arthur Millar create tension in the first three acts of The Crucible, and to what ends? The Crucible is a play written by Arthur Miller in 1952. It deals with a Puritan community and all the witch-hunts and trails that took place in the seventeenth-century in Salem, Massachusetts. In the play the author creates a lot of dramatic tension using different techniques such as character foils, visual tableau, hot and cold imagery and the language used. Tension refers to a feeling nervous and emotional; it is often associated with conflicting elements. Millers creates tension in the play to make the audience think of the conflicts explored in the novel, it also emphasizes the ideas he is expressing through the play. Miller uses character foils to create tension meaning a set of characters that exist to bring out each other characteristics, it is a contrast made through the characters. One of the main character foils is Elizabeth Proctor and Abigail Williams, these two characters are completely opposite, the only thing they have in common is their love for John Proctor. Abigail is a strong, manipulative character, "John - I am waitin' for you every night." (Page 21), she is scheming and wants Proctor; 'every' suggests she is victimizing herself, making it sound as if the waiting was eternal. ...read more.

and "Danforth: reaches out and holds her face, then: Look at me!" (Page 105). Miller creates an atmosphere of interrogation which could lead to the death of several characters. The fact that they can't see each other causes tensions as they don't know what the others are doing. Miller uses dramatic irony once again as the audience knows Proctor has already confessed everything but Elizabeth has no idea of this. Miller creates this tense triangle to show more drama and conflicts in the play, during this scene the audience feels nervous and anxious. The plot of the play also creates the tension; it is centered on dark issues such as secrecy and lust. "That my daughter and my niece I discovered dancing like heathen in the forest?" (Page 9). This shows the secrecy of the girls, also 'discovered' suggests they were hiding. This creates tension because the audience feels the dark secrets this Puritan community is filled with. Lust is an important theme in the play which is used to create tension. Miller uses the stage directions to express this lust and thrill the audience, "Proctor, his smile widening" (Page 20) and "He takes a step to go, and she springs into his path." (Page 20). The change in attitude with Proctor and how direct and confident Abigail is creates tension; the audience is excited and wants to know more about this relationship. ...read more.

(Page 22). This reference to hot and cold creates tension because it is a contrast Miller uses to show Abigail's hate and resentment towards Elizabeth. Miller uses different language techniques to create tension such as euphemisms, metaphors and pauses. Polysemic words create tension, "I know you better." (Page 21). The audience at first is not sure which meaning the characters are referring to which causes confusion and intrigue. Miller uses pauses and short sentences to create tension, when Elizabeth and John meet after being in jail the conversation is tense, "The child? It grows." (Page 124) and "I know it. Pause. None- have yet confessed? There be many confessed." (Page 124). The flow of the conversation is fast and short, it creates tension because neither of the characters knows how to act. It portrays an awkward and uncomfortable situation which is tense. Miller does this to show the amount of time that has passed and how each character feels. The Crucible is a play which contains a lot of tension; it is created using a lot of different techniques. Miller creates tension to evoke an emotion on the audience; at times they feel shocked or confused. Also it helps the plot of the play and the author is able to communicate his beliefs, and in this case he is very successful as the tension is clear. ?? ?? ?? ?? ...read more.